Ten Popular Songs that Point to the Transcendent 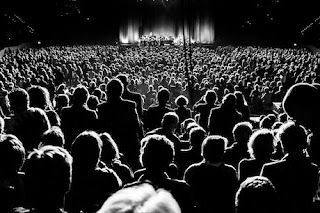 One of the most-viewed posts here was called "Ten Secular Songs with Religious Themes". Now, I'm not that person who scours the pop cultural landscape with a magnifying glass looking for oblique references to a latent Christianity. But I do believe that Christ is very much alive, and can be found in the remotest corners of humanity. Sometimes the profoundest truths are not in theology books but in the lyrics of the poets and the insights of artists.

Four years later, I'd say it's time for a sequel. The following songs have in common a certain degree of popular acclaim, although not be familiar to all readers. They are, I submit, beautiful songs that point beyond the mundane, offering glimpses of the transcendent -- that is to say, of God who is beyond this material world, while nonetheless present in this life as well. They remind us that we will one day see God "face to face", and generally reflect the key dispositions of faith, hope and love that anticipate that meeting.

First. Back in 1998 a Canadian artist with an extraordinarily powerful voice named Amanda Marshall wrote a song called "I Believe in You". It was about the value of having faith in someone. What I found intriguing, and still do, is that the first-person narrator remains deliberately ambiguous: is it Amanda singing to her son? To someone else? We see a whole lifetime in sequence, from a birth to a death, with all the major landmarks of a human life in between, so it seems to be almost from a divine perspective. Thus, in the end, for me it is a love song from God to each one of us.

Second. This song came out in January 2016 just after David Bowie died from cancer. A man who seemed to personify the ambiguities and angst of the past forty years, and the constant search for personal reinvention, his death struck a chord with people the world over. "Lazarus", his posthumous final act, is a stunningly melancholic and plaintive hymn that yearns for the transcendence that will soon come. Actually written on his deathbed, the song's lyrics have been much-discussed, but I hear a man on the threshold of encountering his Creator, taking stock of his life in an almost confessional way, and making a plea that despite all of his meanderings, doubts and misgivings, still has a reckless hope.

Third. Continuing the theme of the afterlife, this song from Wiz Khalifa called "See You Again", was featured at the end of the adrenaline film Furious 7. What gives the song lift is the fact that it is an in memoriam to actor Paul Walker, who was accidentally killed on the set of this film. It becomes a paean to the bonds of friendship and of family. Above all, it testifies to the enduring belief that this is not the end of the story. As the title indicates, it too is suffused with the spirit of hope.


Fourth. Back in 1999 Celine Dion wrote this winsome tune called "That's the Way it Is", in which the beloved Quebecoise chanteuse sang about the fundamental importance of the theological virtues of faith, hope and love, and their inter-relations. Seriously. That's essentially what the song is about:
When you're ready to go and your heart's left in doubt / Don't give up on your faith / Love comes to those who believe it / And that's the way it is.  Amen.

Fifth. The Danish group Lukas Graham is climbing international charts with their pop hip-hop song about growing up and anticipating aging. While striking for its millennial vibe, "7 Years" is equally remarkable for its lack of cynicism and openness to the wisdom of fathers and to the true goods in life, like love, children and the gift of time. It seems wise beyond its years, while not in any way pretentious, and exudes something like joy in the midst of life's mysteries.


Sixth. Taking a break from the mainstream limelight, one might savour this casually recorded video of gospel singer Calesta Day warming up in a church somewhere. Have you heard of her? Neither had I. But turn it up and hear it through, and you will have soul-shivers all day. Called "Hear My Prayer", she just keeps going and going, with a range that scrapes the upper echelons of the vocal ceiling, to some baritone depths that will melt your spiritual mind.

Seventh. Ed Sheeran's song "I See Fire" from one of Peter Jackson's Hobbit films, has a remarkable depth of feeling that captures the textures of fraternal communion and the anticipation of shared sacrifice. It is essentially a prayer, in which he sings "calling out, father...", making the petition "I hope that you remember me". The overall theme is the willingness to lay down one's life, should it be necessary, with the comfort of camaraderie to blunt the fear, and the invocation of the mysterious "father" to be with them in their time of adversity.

Eighth. The Fray is a Denver-based rock band whose 2012 song "Be Still" invites comparisons to Psalm 23. "When you go through the valley and shadow comes down from the hill / If morning never comes to be / Be still, be still, be still." A peaceful, minimalist piece about remembering the One from whom we came, and who is the source of all being: "Be still and know I am."

Ninth. Bek O'Brien's hymn to humility and strength in trial and adversity, "Lion's Den" is lovely beyond words. Her jazzy folkloric sound resounds through the entire album of the same name, which contains a song-list that is infused with pathos and heartstring lyricism. I should disclose that Bek is my first cousin, but my fandom transcends bloodlines and is based upon my appreciation for her raw and undiluted musical talent. Here is a live version of "Lion's Den". If readers can find her whole album, they might also take a deep listen to "Pendulum" and "Doubt", among other tracks. They will not be disappointed.

Ten. Love must have the final word. Let's end on a folky vibe, and retrieve Bob Dylan's 1973 acoustic panegyric called "Wedding Song". It is clearly written from one spouse to another, yet might also be heard in a more layered way, like the Song of Songs.