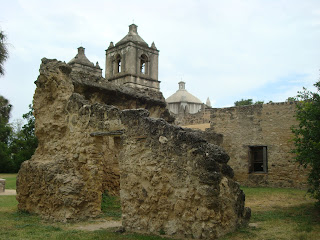 On the recent retreat tour of the U.S. South, I went to visit the old missions of San Antonio. I had heard of their famous cousins on the West Coast, the missions of California, but was not aware of the southern Texas line. They were quite stunning in their age and beauty. Moreover they represented the missionary spirit of the men who built them. They were mainly founded by Franciscans in the early 1700s, and are remarkably preserved today. 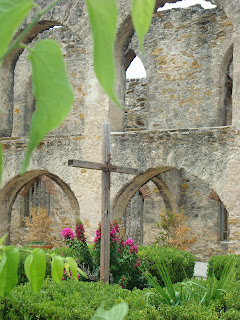 Resembling in spirit and design the Jesuit reductions in Paraguay and even Ste. Marie-among-the-Hurons in Canada, these early sites were centers of missionary activity, agriculture and protection. They had a church, a residence for the friars, workshops, and numerous homes for the native people, all encircled by a fortified stone wall. Since the Apaches steadily raided the area, the local natives found it a welcome sanctuary.

Of some of the larger buildings connected to the churches, only stone arches remains, but they give an idea of how large these edifaces were, long before there was a city called San Antonio (The Alamo, the "national shrine" of Texas, located in the downtown of the city, is actually one of these mission churches). 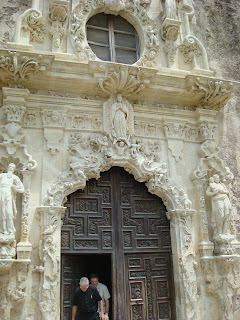 The artistry that went into creating the houses of worship rivals anything from Europe at the time. The mouldings on the facades of the churches are particularly stunning.

There are four major missions, not including The Alamo, all within several miles of each other, in a line that extends south of San Antonio. Amazingly, they are still owned by the Catholic Church -- the Archdiocese of San Antonio -- and they are functioning parishes, where people come to Mass each Sunday. The preservation of the buildings and grounds, however, falls under the National Park Service, which has information buildings at each site.

The four mission churches are the following. Please note these are high-res pictures, courtesy of the NPS, which can be clicked on to get large version and downloaded if desired:

As beautiful as they are in their bare-stoned hue, the churches were originally painted in bright colours and designs. An artist made a reproduction of what they must of looked like in their day: 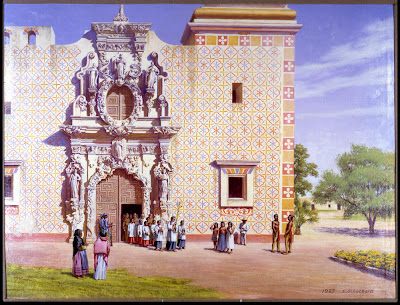 These ancient churches are worth visiting. They are both a national treasure, patrimony of the Church, and a tribute to the men and women who laboured there many centuries ago.