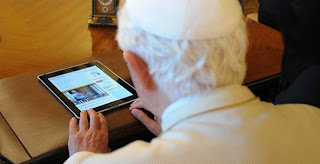 The theme for the 2013 World Communications Day message was revealed at a press conference Tuesday:

While the message itself is always published on the Memorial of St. Francis de Sales, patron of writers (January 24), the theme is released on the feast of archangels (Oct. 2) the fall before, and sets the stage for reflection and teaching to begin. The announcement of this theme of digital media continues a thread that began with 2009's "New Technologies, New Relationships" and which continued with subsequent annual messages. WCD was the sole annual celebration called for by Vatican II, and began in 1967.


Here is the text of the press release about the theme:

"One of the most important challenges facing the task of evangelization today is that which is emerging from the digital environment. Pope Benedict XVI calls attention to this particular topic, in the context of the Year of Faith, in his choice of the theme for the 47th World Communications Day, "Social Networks: portals of truth and faith; new spaces for evangelization".

The theme suggests a series of important points for reflection. During a time in which technology has emerged as part of the fabric of connectivity of human experiences, such as relationships and knowledge, we need to ask: can it help men and women meet Christ in faith? It is not enough to find an adequate language, but rather, it is necessary to learn how to present the Gospel as the answer to that basic human yearning for meaning and faith, which has already found expression online.

Such an approach, which will serve to create a more dynamic and humane digital world, requires a new way of thinking. It is not simply a question of how to use the internet as a means of evangelization, but instead of how to evangelize in a context where the lives of people find expression also in the digital arena.

In particular, we need to be attentive to the emergence and enormous popularity of the social networks, which privilege dialogical and interactive forms of communication and relationships."

World Communications Day, the only worldwide celebration called for by the Second Vatican Council (Inter Mirifica, 1963), is celebrated in most countries, on the recommendation of the bishops of the world, on the Sunday before Pentecost (May 12th in 2013).