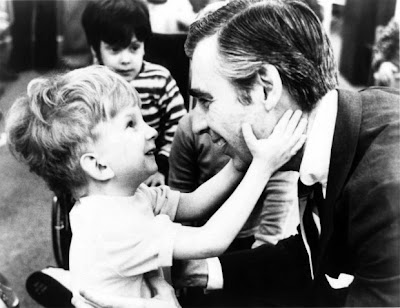 In the wake of the senseless killing of the twenty children and their six teachers in Newton, Connecticut last week, there is some traction in the on-line world remembering the nation's unofficial children's pastor, the late Fred Rogers of the multi-decade television show, Mister Roger's Neighbourhood. Sometimes the object of jokes and parody, the fact remains that he was something of an icon of children's education and entertainment. His show lasted more than thirty years (1968-2001), and his gentle and patient persona affirmed and influenced generations of children.


Rogers' goodness and strong moral compass was not a stage persona, but was genuinely constituent of who he was. He was married to his wife Sara for more than 50 years, and, though less widely known, was also an ordained minister in the Presbyterian Church. He had a degree in musical composition, but while working as a puppeteer for a children's show on Pittsburgh's WQED, studied theology at Pittsburgh Theological Seminary in his free time, as well as took courses in child development. He was ordained in 1963, but decided that his passion was children's programming. He went to Toronto and created the first version of Mister Rogers' Neighbourhood for the CBC, with Ernie Combes, the future host of Canada's popular multi-decade children's show Mister Dressup, as his understudy. Rogers' show transferred back to Pittsburgh where it remained and was syndicated on PBS for nearly three decades.

Rogers was concerned about the moral quality of television programming. “In a young child’s mind, parents probably condone what’s on the television, just like they choose what’s in the refrigerator or on the stove,” he told Christian Century magazine in 1994. “That’s why we who make television for children must be especially careful.” Rogers used stronger words about violence on television towards the end of his life: “I plead with everyone who is producing and purveying these atrocities to please remember the children.”

Mister Rogers was often called upon to make sense of senseless events. After the Paducah, Kentucky high school prayer-circle shootings in 1997, Rogers spoke about how disturbed he was that the shooter had boasted about planning “something really big,” Rogers told Esquire magazine, “Oh, wouldn’t the world be a different place if he had said, ‘I’m going to do something really little tomorrow’?” After Columbine, he was asked in a CNN interview for his advice about how parents’ could explain the massacre to their children. Rogers said simply, “Those children need to know that the adults in their lives will do everything they can do to keep them safe. It doesn’t mean we’re always going to be successful, but it does mean we’re going to try.”

Two events, to my mind, illustrate the power of Rogers' child-like wisdom. The first was when he spoke in front of a U.S. Senate Sub-committee in 1969, which was threatening to cut millions of dollars of funding for children's programming. He spoke for only six minutes and the chairman of the committee, a man not known for his patience, said Rogers' words had given him goosebumps -- as well as twenty million dollars for ongoing funding.

The other event that showed Roger's simple moral authority took place at the 1997 Emmys, where he was being given a Lifetime Achievement Award. Rogers thanked the star-studded audience then said: “All of us have special ones who have loved us into being. Would you just take, along with me, ten seconds to think of the people who have helped you become who you are? Ten seconds of silence. I’ll watch the time.” There was a titter of laughter, followed by a rare moment for any broadcast medium: ten second of pure silence. People reflected. Tears streamed. He ended by saying “whomever you are thinking about, how pleased they must be to know the difference you feel they made.” Instead of basking in his moment of glory, Rogers used the occasion to help others. He was an apostle of gratitude, of putting other people first, and of the authority of humility. It was basic Christianity at its best.

What would Fred Rogers say about the most recent school shooting? He would likely plead for us to consider the children of our nation. First, that we reassure them they are safe; second, that the adults remember we are a great society insofar as we consider our weakest members. He might say that all culture and commerce should revolve around that which makes us human: the family, and the life and well-being of children that are at its core.