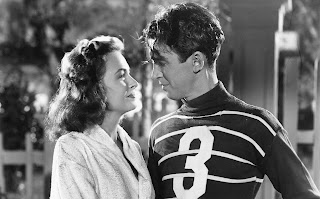 
Plot
The townspeople of Bedford Falls are sending up prayers for George Bailey (Stewart), who is in great distress. Their prayers are heard and the angel Clarence (Travers) is assigned to come down and convince George to not commit suicide. George is a good man, who sacrificed the dreams of his youth to serve the needs of his neighbours. He gave up traveling the world and going to university, and inherited the savings and loan business from his father. Over the years he resisted the proposals of avaricious banker Mr. Potter (Barrymore) to buy out the family business. He married the lovely Mary Hatch (Reed) and had four children with her. When his Uncle Billy (Mitchell) loses $8,000 of their clients’ money, George believes he is facing ruin and that he is worth more dead than alive. Once Clarence sees he is not able to persuade George that life is worth living, he decides to show him the life in the town as if George had never existed.

Film History
Nobody in Hollywood wanted the script about a man who learns what life would be like if he had never been born. But Frank Capra, fresh off his project of producing war-time documentaries, scooped it up, rewrote the screenplay, and cast Jimmy Stewart and newcomer Donna Reed. When the film opened in late 1946, however, Capra’s special project received mediocre reviews. Post-war America was in the mood for light comedy, not an existential reflection-piece. Nominated for five Academy Awards, it came home with none. So how did the film become the champion it is considered today? Probably two factors: first, within a year, Capra began receiving letters, including more than 1500 stuffed in a bag from the inmates of San Quentin Prison, which described the profound impact the film had on them. The letters kept coming from all over America for years; Capra’s film was connecting deeply with the people.

Second, there was an office error that might today be called providential. In 1974, the studio accidentally forgot to renew its copyright ownership and the film passed into the public domain. Television networks saw an opportunity and began to broadcast it every year, exposing Capra’s film to new audiences (the rights are owned by NBC today). Over time, the generations have come to realize the film’s enduring, universal appeal. In 2006, it was ranked as the #1 Most Inspirational Film by the American Film Institute. The AFI also rated it the #20 Greatest Movie of All Time. Both Capra and his star Jimmy Stewart both said that of all the films they ever did, It’s a Wonderful Life was their favourite. 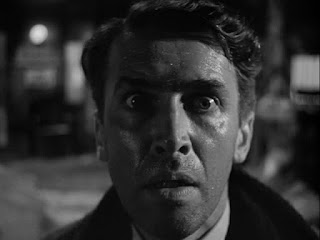 
“Until we realize that things might not be, we cannot realize that things are. Until we see the background of darkness we cannot admire the light as a single and created thing. As soon as we have seen that darkness, all light is lightning, sudden, blinding, and divine. Until we picture nonentity we underrate the victory of God, and can realize none of the trophies of His ancient war. It is one of the million wild jests of truth that we know nothing until we know nothing.”


Ignatius has two things to say about love. First, that love ought to manifest itself in deeds rather than in words. As the saying goes, words are cheap, but actions speak volumes. How we act is a more eloquent expression of where our heart is than all the “heart-felt” beliefs we may profess ardently in our speech. I once saw a fridge magnet that said: “Everyone wants to save the world, but nobody wants to help mom do the dishes.”

George Bailey is the everyman who has had to subvert his idealistic dreams to serve his town. How he does this is described by second point of St. Ignatius with regard to love: that love consists in a mutual sharing of goods. The lover gives and shares with the beloved what he possesses, and vice versa, the beloved shares with the lover. "So, if one has knowledge, one shares it with the one who does not possess it. The same happens if one has honours or wealth and so on." George Bailey spends his life sharing what he has with his neighbours. The Bailey Building and Loan exists to help the blue-collar workers and the newcomers to town. It invests in the community and allows immigrant families to own their own homes rather than have to rent dingy apartments from Mr. Potter.

George’s generosity has become instinctual, a part of who he is. We see flashbacks to several key incidents in his life that have developed this trait: he rescued his brother Harry from drowning after he fell through some ice, he prevented a grieving pharmacist from accidentally poisoning a customer, and he saved the Building and Loan several times. George, it is not too much to say, acted out of an authentic concern for his family and for his town, sharing the “goods” of his courage, his availability, his sense of justice and the common good. This is, perhaps, the foremost point of It’s a Wonderful Life. What makes life wonderful, then, but the love – as described by Ignatius – exchanged between persons – the giving of ourselves and our possessions, even if they seem small and inconsequential.

George, of course, does not recognize this trait, and even struggles with his decisions, as we often do. If he was aware of his generosity, it would have lessened its quality, for self-conscious generosity becomes the do-goodery that is a parody of love, and which tends to annoy rather than build up.
George is entirely oblivious of the fact that he is a good man until the very end, which endears him to us. Even at the finale, it is the surprise of the discovery that captures George, which overpowers into gratitude, and restores him to joy.

In the “Fourth Week” of the Spiritual Exercises, the retreatant contemplates the joy of the resurrection, and thereby attains a surprising new kind of love for the Lord. The resurrection was unexpected – even for the disciples who were supposed to know better. We should all be open to being surprised by God, but not without faith: “If we lose our sense of wonder, no wonders will occur among us”. Genuine faith helps us recover our sense of wonder. George Bailey found it when he realized that everything about his life had been a gift: his existence, his friendships, the impact he’d inadvertently had on others.  St. Ignatius invites us to consider everything about our lives that is also a gift – namely everything. Since we are not the authors of our own existence, there is something fundamentally generous in the mere act of being alive. If we can get a glimpse of the gratuity of our existence, we get a glimpse of the nature of the Creator.


Meditation Points
Begin each prayer period with the prayer recommended by St. Ignatius. Ask God our Lord for the grace: “for an intimate knowledge of the many blessings I have received, so that, filled with gratitude, I may so love and serve God in all things.”


Finally, we may make the “Suscipe prayer”, also called Take Lord, and Receive:


Take, Lord, and receive all my liberty, my memory, my understanding, and my entire will, all that I have and possess. You have given all to me. To You, O Lord, I return it. All is yours, dispose of it wholly according to your will. Give me only your love and your grace, for this is sufficient for me. Amen.

Close each meditation with a personal conversation with Jesus (called a “colloquium”) and an “Our Father”.