Welcome to Our World 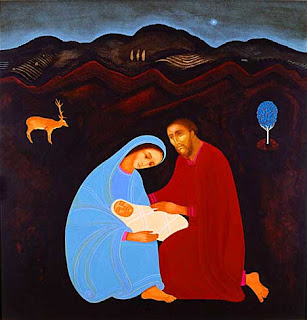 (with apologies: it's a somewhat longer homily-essay)

This evening we celebrate the vigil of Christmas. It is a Mass that is different from the Midnight Mass to be observed later tonight or the Christmas morning Mass tomorrow. All three Masses are different and have different readings. If you are a spiritual diehard, you can attend all three and derive different intellectual and spiritual benefits; but if this present Mass, the Vigil, is the only Christmas Mass you are attending this year, you are fortunate to have heard one of the significant Gospels in the Church calendar year: Matthew’s genealogy, which ends with the dream of Joseph. You know the story: the Angel of Lord tells Joseph not to be afraid to take Mary as his wife, for against all odds of probability, she has conceived her child by the Holy Spirit, and that they are to name him Jesus, for he will save his people from their sins.

Matthew, whose Gospel was written primarily for a readership of Jewish Christians, underlines the connection of Joseph’s dream to the prophecy of the Prophet Isaiah, who said “Look, the virgin shall conceive and bear a son, and they shall name him Emmanuel, which means 'God is with us'." That the translators of the ancient prophetic texts knew that the word for young woman of the prophecy should be rendered “virgin” is an indication of their sense of what the prophecy was actually pointing to: something almost incomprehensible, but certainly extraordinary, would happen in the fullness of time, when God and humanity were ready.

How charged with drama this story is! How much depended on Mary believing the angel who appeared to her; how much depended on Joseph believing the angel who spoke to him in a dream. That the future of humanity’s redemption, according to this plan of God, rested upon the belief and assent of these two humble persons, Mary and Joseph; that all of Israel’s history, from the first time God spoke to Abraham, through Moses leading the people out of slavery in Egypt, through the various captivities over hundreds of years and the prophets who were sent to exhort and encourage: all of this history, which we know as the Old Testament, was oriented to these two moments of decision on the part of Mary and then of Joseph. These humble children of Israel, who had listened intently to the word of God all their lives, had become sensitive to his will and his voice, such that they could recognize it when it came. And thus, they were ready to be the key players in the great moment of salvation: when God-in-heaven would become God-with-us.

There are people who struggle with the whole history of salvation question, and ask why the incarnation of Jesus, with his subsequent rejection and passion, death and resurrection was necessary. Why couldn’t the Divine Creator have waved his divine hand and restored creation to its original wholeness? Why did it require the burden of Bethlehem and of the Cross? I can understand this line of questioning, for the burden, in certain respects, falls upon us too: we are also tasked with the responsibility of cooperating with God in the ongoing work of salvation, of overcoming sin in our lives and helping restore all things to God. And sometimes that feels like work!

But God had one very special reason for planning salvation the way he did. Of course God could have pointed his finger and instantly renewed creation, but he wanted it to happen in a greater way. God wanted creation itself to be an actor in its own re-creation, to be a participant in its restoration to wholeness. This particular plan can only be understood as the act of a loving parent, for a good parent knows that inviting the child to help fix what the child had broken, ennobles and gives dignity to the child.

My father, who is an artist, tells the story of how once, when we were kids, he had left a painting to dry on our dining room table. This painting was made on a kind of micro-particle board called Masonite. Masonite is exceptionally sturdy and will last forever – as long as it doesn’t get soaked, for then the fibers will separate and the image will be ruined. That day, one of my brothers, who at around five or six years old had a knack for both creative and accidentally destructive activities, ran the bathtub upstairs, plugged the drains with a cloth (for reasons unknown), and watched it spill over and flood the floor. It then proceeded to drip through the ceiling and onto dad’s painting, which began to curl, causing the water to collect on the image. When my father discovered his creation was ruined, he gave a cry of alarm, followed by a veritable storm of understandable emotions. My little brother was quite contrite, but then he and my father took a bunch of towels and gently began to attempt to dry the painting (The painting was of The Baptism of the Lord, by the way!). In the end, hope beyond hope, the painting survived, and the particles did not disintegrate. But most of all, my little brother was so happy that he was able to help repair the damage he'd inadvertently caused. It allowed him to regain his dignity, and he and my father had a special bond after that.

In a way, God’s plan for restoring his broken creation is similar. He wanted us to be involved in the work of repairing the damage of original sin. So Jesus Christ, the Divine Son of God, descends into our world, but at the same time, is also be fully human, fully man, a member of the human race, of the Israelite nation, son of Mary and son of Joseph. His human nature is given him by Mary. Mary, who is daughter Zion, gives her yes representing all of Israel. Israel represents all the nations of the earth. The nations, of course, represent the world, which is all bound up and dependant upon this young woman, a girl named Mary of Nazareth, who gives God his human nature.

So on the vigil of Christmas, we give thanks to God for inviting us to be co-participants, though Mary and Joseph, in the drama of our redemption. It’s a logic that continues to be at play in the dramas of our own lives and the work of our own individual salvation. God sends us the graces from above, but we are invited to be participants, to prepare our hearts, to cultivate a listening spirit, receptivity, and thereby conceive within our hearts and lives nothing less than Jesus Christ himself. When this happens, the healing of ancient hurts and wounds takes place; the overcoming of addictions and bad habits occurs; the forgiveness of offenses made against us, grudges that hold us captive and corrode us from within -- they start to melt and the freedom of new life begins to spread its warmth. This leaving behind of the old man and woman, and becoming the men and women each of us was intended to be from the beginning, to be "people of the heart", to be adopted sons and daughters of God the Father – this is the good news of Jesus Christ Son of God.

What does it mean to be people of the heart? The great saints and the best of the psychologists say the same thing: that at root, the human heart seeks to engage in essentially three activities: it wants to hear and be heard, it wants to see and be seen, and it wants to know and be known. Love, both when it is given and received, always is specified in one of these acts. Yes, the heart is something that "feels", but in the real world, the heart wants the concreteness of hearing/seeing/knowing and being heard/seen/known. We yearn for this. This is why God has given himself to us in the scriptures. So we can hear his voice when his word is proclaimed, so we can see him when we imagine in our mind’s eye his coming in the flesh, so we can know our God, who is revealed in his Word, revealed as John says, to be Love itself.

As we enter into the great and holy mystery of Christmas, let us ask ourselves how our love might better hear, better see, and better know those whom we are called to love. How we might imitate God who forgives his creatures their sins and their weaknesses. How we might be profoundly grateful that he has sent his Son, present to us today in the Word of God, the Eucharist on the Altar, in the persons of the poor who are all around us, and in all persons of our families and communities – that God is indeed “with us”, Emmanuel,  who, as the prophet Isaiah said in the first reading, calls us to be no more forsaken, our land no more to be called desolate, but rather that the Lord “delights in you” – just as a young man marries a young woman, so shall your God rejoice over you!

Given all this, let us enter Christmas now with a prayer to Him who is coming to be born among us, a welcoming of the Christ Child to our world:

Hope that you don’t mind our manger


How I wish we would have known


Welcome to our world.

(Welcome to Our World, written by Chris Rice)