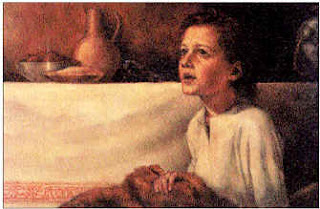 One of the main graces sought from the visit of the St. Francis Xavier relic to Canada is "vocations". While the word "vocation" is not itself in the Bible, the pattern of God calling individuals certainly is. There is a particular dynamic at work when this happens.

Consider the story of the calling of the first prophet, the boy Samuel, who will play such an important role in Israel. God calls him out of his sleep – an important detail often overlooked.  When God’s call comes, it wakens us, alerts us, moves us from the fog of unknowing and into the clear light of knowledge and wakefulness. The call of God is thus like a good cup of coffee, instilling a bracing sense of awareness and purposefulness.

Of course Samuel hears the call but does not know right away who has called him. At that time “Samuel did not yet know the Lord, and the word of the Lord had not yet been revealed to him.” This intriguing description should also give us pause, for it suggests the possibility of a "before" and an "after" of encounter with the Lord. It takes the mediation of the priest Eli to discern that the Lord was actually speaking, to distinguish between a genuine and a merely imagined call. Eli plays a key role in helping Samuel train to listen to the word more perfectly.

A few days ago I got around to seeing the latest Star Wars film, “The Last Jedi”. An important part of its plot centers on the attempts of the young woman Rey to get Luke Skywalker, an older Jedi, to leave his island monastery to assist the Resistance (which can be seen as a metaphor for the Church) in its fight against galactic evil, and to help her understand her vocation as a Jedi. She has many special abilities, but requires the assistance of a master to refine them. Luke's attempt to train her mainly focuses on helping her hone her interior sensitivity to the Force, which, although tinged by a gnostic New Age spiritualism, can also be a metaphor for apprehending the Word of God. The Word, as St. John writes, existed in the beginning, it was with God and it was God, and the Word was that through which all things came to be. The life of the Word is everywhere.

Similarly, we too can learn to tune our inner ear to the Word of God, by familiarizing ourselves with the sacred scriptures, which we call his “Word”, since the writings were inspired by the Holy Spirit. We also come to recognize the voice of the Lord when we quiet ourselves in prayer and cultivate an inner disposition of receptivity.  This is the advice of Eli to young Samuel: “Go, lie down; and if he calls you, you shall say, 'Speak Lord, for your servant is listening'.” Samuel obeys the instruction of Eli, and the Lord “came and stood there, calling as before.” There is an immediate presence now, and the text wants us to understand that God was near when he spoke. His voice is not to be taken as an echo from the distant past, or a whisper from fathomless depths. Rather, it was the exchange between the Lord and his servant, between the Creator and his creature. Samuel responds saying “Speak, for your servant is listening”. He has begun to cultivate his inner ear, to continue the dialogue.

In the “Come and See” drama of St. John's Gospel, a more developed exchange takes place. John the Baptist, the forerunner of Christ, points him out to his disciples. His disciples run after the Lord, sent by their former teacher to become followers of a new teacher. Discipleship means follower-ship. They walk behind him possessing only the knowledge that they have been sent. Before long, Jesus turns around and says “What are you looking for?” They cannot really put it into words, so they say “Teacher, where are you staying?” Where is your home, so we can get to know you better? “Come and see,” he says. It’s an invitation to accompany him, for only those who accompany will see.

These passages invite us to evaluate two dimensions of our lives: our listening and our accompanying. Considering young Samuel, we might ask ourselves how familiar we are with the voice of the Lord? Do I know it when I hear it? Do I seek to familiarize myself with it through Word, Sacrament and prayer? At the end of my life, when I come before the Lord face to face, will I be meeting someone who I know well, or will he be more like a stranger I'm meeting for the first time?

Considering young Andrew and John who run after the Lord, I might ask myself what is the state of my discipleship. Do I let the Lord lead me forward? Has Jesus Christ captured my curiosity and imagination? Am I interested in who he really is, where he is going, and what he might ask of me? Or do I keep a bit of a hesitant distance between us, for fear he may ask something not to my liking? These are the honest questions of honest Christians.

If we look at Andrew and John, and then Peter, we see disciples who become transformed by their encounter with the Lord, so much so, that Peter gets a new name (Cephas – the Rock). Our encounters with the Lord, both the powerful special experiences and the steady life of regular prayer, will bring about a similar transformation. We call it metanoia or conversion. Our part in it is easy: to pay attention to his voice and listen to his instructions. This is the basis and precondition of vocation. Without it, vocation is just a word, a concept.

As the visit of St. Francis Xavier's relic to Canada unfolds, may the grace of vocation well up in our hearts, and may it be characterized by an increase in listening and following, of generous spirits that are open and unafraid.