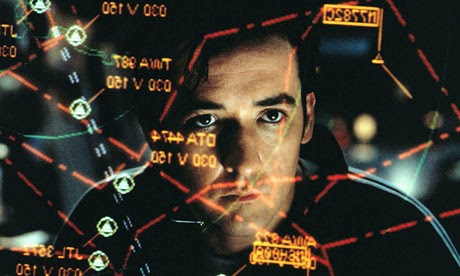 "O what tangled web we weave, when first we practice to deceive."
–  Sir Walter Scott

Pushing Tin opens in the control room at the New York's Terminal Radar Approach Center (TRAC), where a team of air traffic controllers coordinate some 7,000 flights a day that zip in and out of Kennedy, La Guardia, and Newark airports. It’s a hectic and high-pressure work-place. When a tour of kids comes through the facility they are told: “Air controllers are responsible for more lives in a single shift than a surgeon in a lifetime.” Nick Falzone (Cusack), known as “the Zone”, is the hotshot controller of the group, who owns his reputation of being top of the game. Nick relates to his suburbanite wife Connie (Blanchette) with the same short attention span that enables him to land planes in split-second time frames. His status is challenged when a mysterious new transfer, Russell Bell (Thorton), arrives to work at the Center. Russell is the opposite of Nick – he’s restrained, calm, and of few words – but shares with Nick a reputation for daring and a perfect safety record for landing planes. Russell’s demeanor provokes Nick into challenging him to little male-ego contests that progressively intensify. Nick is also intrigued by Russell’s voluptuous young wife Mary (Jolie), who turns heads at a backyard BBQ party. The rivalry between the men soon gets out of hand, and regrettable things happen. Before Nick knows it, he has lost his cool, his ability to “push tin” and maintain slick control of his life.

This film has gone almost unnoticed, despite British director Mike Newell’s reputation for acclaimed odd-ball films like Four Weddings and a Funeral, Into the West, and Enchanted April. This is most likely because it doesn't fit neatly into any genre, which usually dampers popularity and box office success. Is it a comedy, a romance or a drama? It's a comedy, at any rate, in the classical sense. 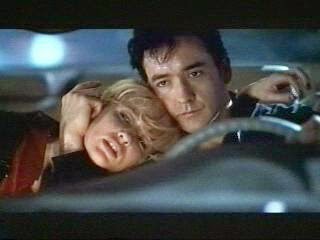 The character of Nick Falzone in Pushing Tin is an “everyman”. He represents all of us, citizens of the modern age, for whom life can be fast-paced, excessively busy, and demanding to be “managed” so as not to get out of control. We tend to fear the prospect of our lives being “out of the control” as if some primordial chaos lies waiting to surge and snatch us up, or that we might find ourselves disintegrating into a thousand pieces. We have a particular tendency to micro-manage ourselves and the people around us. It’s safer to be in control.

Control is not necessarily a bad thing. There is a certain level of “control” that we need in our lives in order to be responsible peoples: mothers, fathers, workers, students, and so on. If I never set my alarm clock and just woke up “whenever”, I would probably be late for a great many appointments, causing inconvenience to a great many people. If I didn’t control the amount of food or drink I consume I might end up with a stomach-ache, or worse. If I didn’t think before speaking I would, no doubt, say a lot of silly things I’ll regret (sadly, I still do this from time to time!). Exercising responsibility over my thoughts, words and actions is part of living an ordered life, and is a habit that is quite conducive to happiness.

But there is another kind of control that Pushing Tin is hinting at, ever so subtly – or perhaps not so subtly, given the great obvious metaphor of the movie (hint: in the title). Our “control” is not a real freedom, unless we’re free to give it up when higher laws, such as love, require it. Otherwise it becomes a bondage, just another idol. If fear is what motivates our need to plan and direct, then we are not really liberated people, and that’s the kind of control we should seek to give up or surrender.

There are a many other good reasons to consider embracing the “surrender” we are talking about.

First, consider that we can’t really control our lives. Control is mostly an illusion we adopt, a conceit that we indulge. Even John Lennon noted that “life is what happens when you are busy making other plans.” Aside from the obvious and necessary planning that practical living requires, if we obsess about ensuring a seamless day, that day is sure to become unraveled. Micromanagement is a recipe for frustration.

Second, when we leave room for the freedom of other people in our life to breathe, we find that we have happier and healthier relationships. Friendships begin to flourish and family members bond more closely. It’s one of the great paradoxes of life that we only really have love when we set it free, that is, not be possessive about it (or him or her).

Third, and most importantly, we need to leave room in our lives for the spontaneity of grace, to allow God room to enter and inspire. It may take courage to “let go and let God”, since we have all kinds of irrational resistances to the idea. But again, a true Father has only the best interests of his child in mind. We should not be afraid of giving God some ear. His still, small voice may be the best thing we hear all day.

So, surrendering control is ultimately an act of genuine humility. It takes humility to say “I’m sorry” and admit that I have been wrong. But humility is only another way of acknowledging “reality”, and thus it is freedom. When I am humble, I’ve shed illusions, and I know exactly who I am, both my strengths and my weaknesses – and that God loves me for who I am. So both responsibility and “surrender” go hand-in-hand; they are like complementary friends who walk together.

A good day is one in which I have offered everything to be “fructified” – made holy and fruitful – by God himself. It always astounds me how positively different my day is when I have begun it in prayer, compared with days in which I have launched willy-nilly without entrusting the day to God. St. Ignatius of Loyola, in the Spiritual Exercises, recommends praying for a particular grace in this way: “that all my thoughts, intentions and operations be directed purely to the praise and service of his Divine Majesty.” This powerful morning prayer means that everything I do and say in a day can be made fruitful for God. It evokes both responsibility and surrender.

Nick “the Zone” Falzone believed that he could control his life, including the acts that he wished to keep hidden. But in the end these acts find their own way to reveal themselves, bringing about their own cosmic justice. Non-Christians might call this karma. Christ said “nothing is hidden that shall not be revealed, nor anything secret that shall not be made known and come to the light” (Luke 8:17). Nick learns this the hard way, but in the end, realizes that the great revealing of his real self is a great mercy.

While the characters in Pushing Tin are fallen human beings, and the director explores the nuances of their egotism with unrelenting attention, he also does so with a great overlying sympathy, as the periodic doses of humour indicate. What is true comedy but the ability to laugh at our human folly as it realigns with right living? In this way, the director shows us a pathway to inner freedom, through the spiritual practice of letting go. 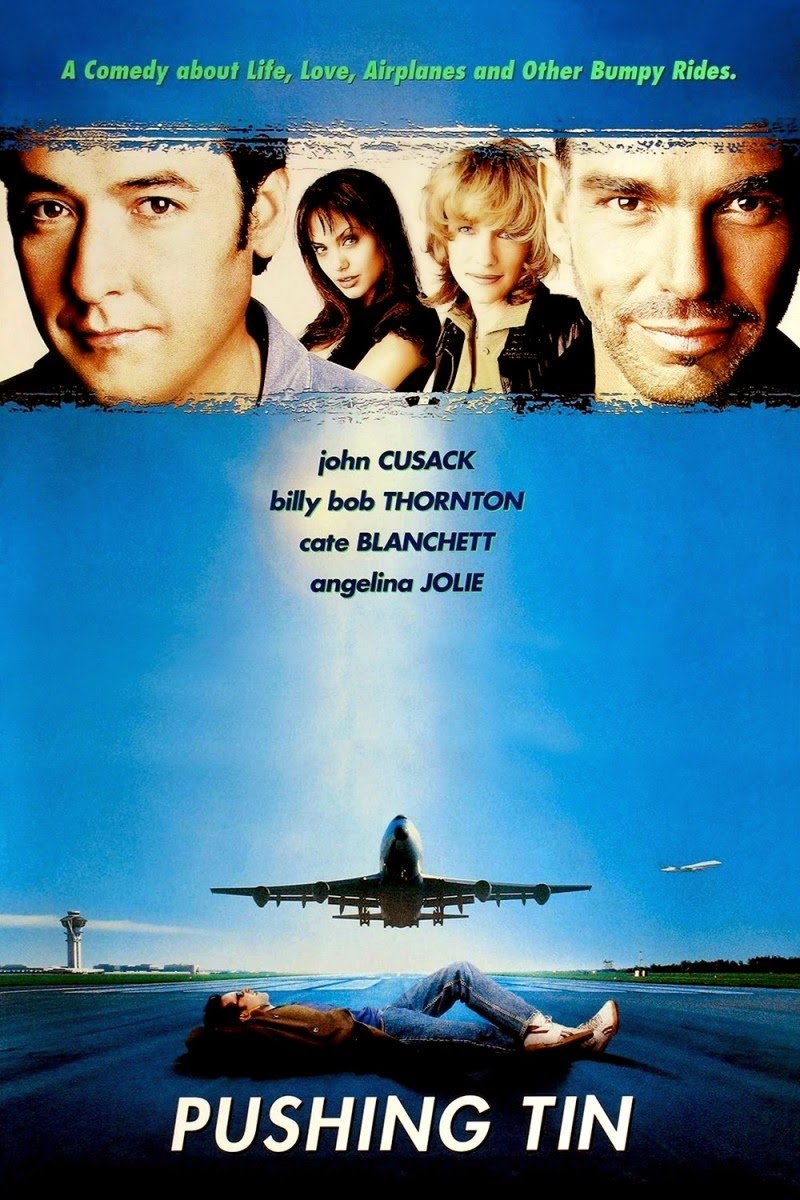 1. How does the title “Pushing Tin”, the central metaphor of this film, point to a deeper meaning about human life?
2. What does “surrendering to God” mean to me, and what area of my life might need “surrendering”?
3. How have I experienced both forgiving and being forgiven, and what was the freedom like that followed that spiritual act?

“Through prayer we succeed in being with God. Anyone who is with God is far from the enemy. Prayer is a support and protection of charity, a brake on anger, an appeasement and the control of pride. Prayer is the custody of virginity, the protection of fidelity in marriage, the hope for those who are watching."