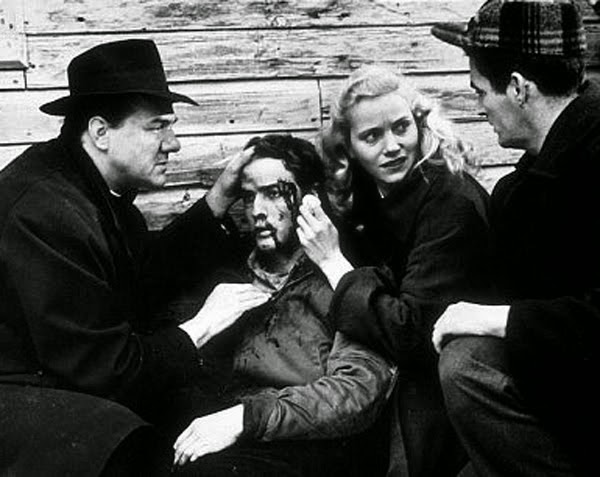 
“Conscience... that stuff can drive you nuts!”
– Terry Molloy, On the Waterfront
Plot

Terry Molloy (Brando) is a young ex-prizefighter who is now a longshoreman, given easy jobs on the New Jersey waterfront because his older brother Charley (Steiger) is the right-hand man of the corrupt union boss, Johnny Friendly (Cobb). After Terry unwittingly allows himself to be used to set up the murder of a dockworker named Joey, he starts to question the basic assumptions of his life, including his loyalty to Charley and Johnny, who, after all, had ordered him to take a dive in his big fight in Madison Square Garden several years before. When he meets the murdered man’s sister Edie (Saint) and Father Barry (Malden), he is challenged even more to see the underlying corruption in the dockyards and his own complicity in it.

• Near sweep of the Academy Awards in 1955, winning 8 Oscars, including Best Picture, Best Director, Best Actor, Supporting Actress, Cinematography, Writing, and Editing.
• In 2007, the American Film Institute ranked it as the #19 Greatest Movie of All Time.

When On the Waterfront was released in 1954, it was 23 years after Pope Pius XI had issued his social encyclical Quadragesimo Anno (1931). The encyclical was written on the ethical implications of the social and economic order, similar to its predecessor Rerum Novarum (1891), Leo XIII’s seminal social encyclical 40 years prior. Pius XI described the major dangers to human freedom from both unrestrained capitalism and totalitarian communism.

Pius XI called for a social order based on the principles of subsidiarity and solidarity, especially between employers and employees through new forms of cooperation and communication. He condemned communism but also the social conditions which nourished it. The encyclical called for a new social structure in which government, industry, and labor work together in a kind of third way between capitalism and communism. With this in mind, we can see in this film how the harmonious relationship between labour and capital can go astray, and that corruption is possible in any sector of society, wherever human beings do not respect the fundamental human dignity and rights of their fellows. Going a little deeper, the film also shows how any reform of a “system” must begin with a reform of the human heart. Terry Molloy’s moral awakening represents the personal “metanoia”, or conversion, that must precede the workers’ collective “metanoia” – which here means gaining the courage to end a corrupt system of domination, cronyism and kickbacks (enforced by violence), and the restoration of a more just system of union representation.

In the 1950s, in America, new worker and urban apostolic movements were active in the Church, the best known being those by Dorothy Day and Peter Maurin, founders of the Catholic Worker movement, and Catherine Doherty, who founded the Madonna House Apostolate. The character of Father Barry in On the Waterfront is based on the Jesuit priest, Fr. John Corridan, who fought corruption and organized crime on the New York City waterfront in the 1940s and 50s. He was one of many men and women who prayed and worked hard for justice in impoverished sectors of North American society. Their work continues today.


“ Some people think the Crucifixion only took place on Calvary. Well, they better wise up!”
– Father Barry, On the Waterfront

For those of us alive today, the economic situation has changed dramatically since that of the 1950s.  North American economy is no longer primarily industrial, but has evolved into a faster, wealthier digital culture, the so-called information economy. This film, however, reminds us that some things never change: there is still conflict between the “hawks and pigeons” (notice this motif throughout the film!) today just as in every age. Souls are still damaged especially by the various forms of abandonment and neglect (as happened to Terry in this film). The exclusive pursuit of profit still drives many lives. Conscience – the still small voice of God written on our hearts – still speaks to each of us and calls us to metanoia.

Edmund Burke famously said, “All it takes for evil to prosper, is for good men to do nothing.” Sometimes conscience calls us to break out of a certain basic complacency, to crack our “comfort zones” as this complacency is often called today. Conscience can call us to make a greater witness to Truth, Goodness or Beauty than what we are accustomed to, even at personal cost. Our faith, too, requires of us an active form of listening, of paying attention to God’s voice in the world around us, and then acting. While there is, on the one hand, the risk of becoming “busybodies for Christ”, the extreme of activism, there is also the opposite risk of quietism, of letting things slide because the effort could cost too much. St. Ignatius of Loyola notes that the evil spirit loves the tactic of “proposing obstacles” and fears to our interior ear. These fears are often just illusions, “false reasonings”, and comprise 99% of the enemy’s tool-kit. But the answer is not a “golden mean” between activism and quietism, a kind of mushy-middle ground. Instead, Jesus invites to “Be not afraid!”, to take heart – for love will cast out all fear and empower us to do the impossible.

So how might we free ourselves from our own, personal forms of quietism and discover anew our freedom as sons and daughters of God? There are two powerful moments in the film that depict a particular turning point in the lives of the protagonists. We might call them “confessional moments”, scenes in which, having been touched by love, the characters admit they have been complicit in error. We will notice how these scenes are catalysts for the spiritual liberation that follows, although there is some cost. Without giving too much away, we can identify the first such scene as when Terry decides he will accept the risk of losing Edie, and admit to her his role in her brother’s murder. What we witness is certainly an imperfect confession, limited by outside interference, but it frees him spiritually to do what he must do.

The second is one of the most famous scenes in film history, the “I coulda been a contender” speech Terry gives his brother Charley in the taxicab. Here one brother must speak a hard truth to another, and, as director Elia Kazan later said about Brando: “Who else could read ‘Oh, Charley!’ in a tone of reproach that is so loving and so melancholy and suggests the terrific depth of pain?” Terry’s moment of truth-speaking to his older brother causes Charley “to convert” from the task he had set out to do, and make his own act of selfless sacrifice. In a sense, Terry had to “confess” Charley’s sins to and for Charley, by the very act of his gentle but powerful admonishment. This truth-telling, of naming what needed naming, is only possible because there is a shrunken but still living love between them.

In the Spiritual Exercises, St. Ignatius reminds us vividly that “the enemy behaves like a false lover who wishes to remain hidden and does not want to be revealed.” (Sp. Ex. 326), that the seducer loves to operate in the shadows. But by speaking and acting “confessionally”, that is, by living in the light and bringing things to the light, evil can be defeated and love can begin its road to restoration and full flourishing. Indeed, the light is already there, in the hearts of Terry, Charley, Edie and Father Barry. As this film shows, that light will shine in the darkness. And the darkness does not overcome it.

The theme of this film series is “The Hidden Roots of Love”. Somehow, in this classic, noir-like film we see only the beginnings of love taking form and standing on its own two feet. It invites us to consider how love requires a letting go of some voices, and of following others. Love means listening, above all, to an inner voice. Love will probably require of us a sacrifice, but it will, in the end, provide the one reliable pathway to inner freedom. On the Waterfront shows us the subtle and poignant manifestations of human and divine love in an otherwise grim and gritty world. In doing so, it gives us a little glimpse of heaven.

1) Is this film primarily about love or justice? How are they related?
2) As we see in the film, fear is a paralyzer. How do the characters overcome fear?  Does fear play a role in my life that limits my ability to live and love more fully?
3) In every human drama, in one form or another, the drama of the Pascal Mystery (Christ’s passion, death and resurrection) is present in the lives of the characters. Is this the case in this film?