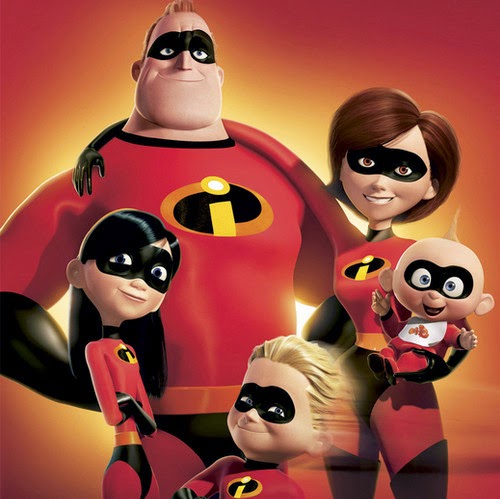 Plot
Bob Parr (a.k.a. Mr. Incredible), and his wife Helen (a.k.a. Elastigirl), are famous crime-fighting superheroes in Metroville, saving lives and battling evil on a daily basis. But after the civilian population begins to resent their overachieving antics, they have been forced to adopt civilian identities and retreat to the suburbs where, 15 years later, they live a "normal life" with their three children Violet, Dash and baby Jack-Jack. Itching to get back into action, Bob gets his chance when a mysterious message summons him to a remote island for a secret assignment. He soon discovers that it will take a super family effort to rescue the world from total destruction.

In Film History
The Incredibles is part of the Pixar juggernaut of uber-successful animated films that towered over Disney (until being bought by The Mouse in 2006), titles such as Finding Nemo, Toy Story, Ratatouille, and Up. It won two Oscars (Best Animated Film of the Year, Sound editing) and “Movie of the Year” at the American Film Institute (AFI) in 2005.

Reflection
The Incredibles is one of those animated films that is enjoyable by adult and child alike. It is carried by delightful storytelling, enriched by a surprising density of plot, as well as vivid characterizations. It also takes its PG rating seriously (all other Pixar films are rated G), depicting family dysfunction and crisis unflinchingly, if sympathetically, and, in a Pixar first, has human villains attempting to kill human heroes, including their children. It’s cartoon violence, of course, but the film surprises by how it draws not only our excitement, but also the fibers of our heartstrings. It taps into personal territory with issues such as repressed talents and unfulfilled potential, soul-draining days jobs, midlife crisis, adolescent insecurity and nostalgia for real heroes. It packs in social commentary on issues such as the dangers of praising mediocrity, of the law-suit trigger-happy culture, and even the risks of marital infidelity. All of these critiques are in the service of a higher truth: the affirmation of the inherent dignity of human life. “Valuing life is not a weakness,” one character defiantly declares, “and disregarding it is not strength!”

So what is the theme that makes this film a candidate for a series on "the hidden roots of love"? A clue may be found in one of its subtle story details. While a plane is whizzing towards a secret island, we can read on the control that the island’s name is “Nomanisan”. Blink and you miss the pun, but it gives us a major key to understanding what The Incredibles is about. Every character is grappling with the use and non-use and proper use of their talents; they go through the great, purifying tests that elevate the practice of their gifts, and help them mature past individualism.

Let’s take each character in turn. Mr. Incredible or “Bob Parr” starts the movie mugging for the “camera” like a celebrity, a man clearly in the prime of his life and at the height of his career. His opening exploits in the city confirm that his powers are being used for the civic good, but at the same time, his attitude is slightly off-key. He struts around with his chest puffed out, and violently rejects a young fan who wants to be his side-kick, an error that will sow his darkest challenges to come. Mr. Incredible is primarily incredible on the scale of muscle-power; but he is Superman without Superman’s humility (although he still has our sympathy, because he is fundamentally good, and very much like us). Later, his soul-destroying job as an insurance claims processor wonderfully illustrates the spiritual miasma of repressed talents and mismatched vocation. His office cubicle is a lonely island in an endless sea of isolated islands.

Elastigirl, or “Helen Parr” seems more content with the family’s hidden role in the suburbs. Her super-talent of stretching her body like a curvaceous Gumby remains restricted to breaking up acrobatic fights between her unruly children. If she is frustrated by the restriction of her special powers, she doesn’t show it. But there is a growing edge to her voice and in her demeanor towards her husband and family that increases as time goes by. While she remains the heart of the Parr family home, she, too, is feeling the effects of her family’s subdued life.

The eldest daughter Violet has the powers of projecting some kind of force-field and making herself invisible, which she does when it helps her avoid awkward social situations. She’s afflicted with angst over fitting in, once telling Helen: “Normal? ... What does anyone in this family know about normal?…We act normal, mother. I want to be normal.” A typical teenager, perhaps, as she struggles to discover and claim her emerging identity. She is also is pointing her finger at the truth of the family’s double-standard.

Dash, the younger brother, chafes under the orders he’s been given not to use his power of lightening-fast speed. He, too, just wants to fit in at school, and be able to compete athletically with his peers, even promising to hold back a little to make the races legit. Dash is acting out at school, pulling pranks on his teachers, getting sent to the principal’s office. He has been told his powers are not something to be ashamed of, but he is definitely not supposed to use them. He finds the contradiction unbearable.

The Parr family is afflicted by a case of hiddentalentitis. They’ve had to bury their gifts, hide their “lights” under proverbial bushel baskets. They are denying the full flourishing and exercise of their abilities. It is frustrating for all of them, whether they are fully aware of it or not, with each unhappy in his or her own way. Perhaps they should never have gone underground, and resisted the government’s resettlement program for superheroes.

Or maybe it was all for the good. Perhaps the discipline of self-denial has, in a strange, roundabout way, been purifying these past 15 years, like a long Lenten journey in the desert. The risk for the powerful is not just that they might become villains (like “Syndrome”, the main baddie in this film, who is clearly abusing the powers he has seized for himself); rather, the risk is the subtle corruption of intentionality, in a way that keeps the exterior shiny-clean and commendable, while inner motives get corroded and tinged by the ego. As T.S. Eliot writes in Murder in the Cathedral: “The last act is the greatest treason. To do the right deed for the wrong reason.”

According to Ignatius of Loyola, all the gifts we are given, even the ones we help cultivate ourselves, not ultimately for our well-being alone, but to be shared. Every grace given contains within it a mission. “Love,” he writes in the Spiritual Exercises, “gives of what it possesses”, even if the only thing I have is knowledge. Knowledge is redeemed, even elevated and expanded, when I share it with others. One might say that our talents don’t ever acquire their full function until they are deployed in altruistic (the inner attitude) gift to others (the outer action). Talent achieves its form only when it is given away in selflessly generosity.

It’s entirely appropriate that a family is the “theatre” in which the characters dramatically learn to mature their use of their talents. A family is the first school of love, where members discover how to serve and be served, to love and be loved. As John Paul II once wrote, “The family finds in the plan of God the Creator and Redeemer not only its identity, what it is, but also its mission, what it can and should do… Each family finds within itself a summons that cannot be ignored and that specifies both its dignity and responsibility: family, become what you are!”

The Incredibles are an indeed an “super” family, with a gross excess of talent. But it is their humanity and weakness that draw us to them in sympathy. There is no perfect family in the real world, but the Parrs model for us how every family, every community, that is built upon human relationship, can learn to orient its love both ad intra and ad extra. In the end, every family that is founded upon love is incredible.

Meditation Questions
1) What are some gifts or talents that I have been given?
2) When I exercise my talents, what are my main driving motives in using them?
3) How have my motives been examined in the past? How might they need to be purified in the present? How do I verify whether I am motivated authentically by love?

St. Ignatius suggests a prayer to begin one's meditation:
“Lord, I ask for the grace that all of my intentions, actions, and operations might be purely ordered to the service and praise of your divine majesty.”