Lord of the World revisited for Holy Week

Many in the media have noticed that Pope Francis has, on several occasions, referred of a novel which he recommends to readers across the globe. It might be considered a strange choice for a pope whose public image is that of a progressivist who is shattering traditions and heralding a bright new world future. The book is a 1907 futuristic apocalypse by Robert Hugh Benson called Lord of the World. Some have called it prophetic in its portrayal of a dystopian post-modern future. My father has cited it as a major influence on his own Children of the Last Days novels. Others, such as journalist John Allen, Jr., have speculated that this endorsement may indicate the Holy Father is thinking that his own time might be short. 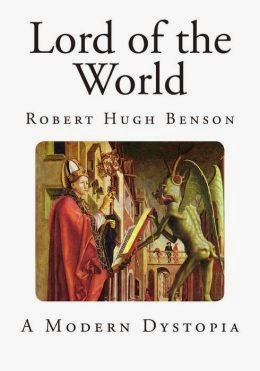 I am not going to review the novel here, but rather quote a remarkable selection from its third chapter. The passage describes an experience that its protagonist, the English priest Percy Franklin, has when he enters into prayer as storm clouds gather around the world. It makes for good reading as Holy Week begins and our own liturgical and mystical summit approaches. It's worth reading in full:

Percy stood motionless until he heard the automatic bell outside tell him that Father Francis was really gone, then he went out himself and turned towards the long passage leading to the Cathedral. As he passed out through the sacristy he heard far in front the murmur of an organ, and on coming through into the chapel used as a parish church he perceived that Vespers were not yet over in the great choir. He came straight down the aisle, turned to the right, crossed the centre and knelt down.

It was drawing on towards sunset, and the huge dark place was lighted here and there by patches of ruddy London light that lay on the gorgeous marble and gildings finished at last by a wealthy convert. In front of him rose up the choir, with a line of white surpliced and furred canons on either side, and the vast baldachino in the midst, beneath which burned the six lights as they had burned day by day for more than a century; behind that again lay the high line of the apse-choir with the dim, window-pierced vault above where Christ reigned in majesty. He let his eyes wander round for a few moments before beginning his deliberate prayer, drinking in the glory of the place, listening to the thunderous chorus, the peal of the organ, and the thin mellow voice of the priest. There on the left shone the refracted glow of the lamps that burned before the Lord in the Sacrament, on the right a dozen candles winked here and there at the foot of the gaunt images, high overhead hung the gigantic cross with that lean, emaciated Poor Man Who called all who looked on Him to the embraces of a God.

Then he hid his face in his hands, drew a couple of long breaths, and set to work.

He began, as his custom was in mental prayer, by a deliberate act of self-exclusion from the world of sense. Under the image of sinking beneath a surface he forced himself downwards and inwards, till the peal of the organ, the shuffle of footsteps, the rigidity of the chair-back beneath his wrists--all seemed apart and external, and he was left a single person with a beating heart, an intellect that suggested image after image, and emotions that were too languid to stir themselves. Then he made his second descent, renounced all that he possessed and was, and became conscious that even the body was left behind, and that his mind and heart, awed by the Presence in which they found themselves, clung close and obedient to the will which was their lord and protector. He drew another long breath, or two, as he felt that Presence surge about him; he repeated a few mechanical words, and sank to that peace which follows the relinquishment of thought.

There he rested for a while. Far above him sounded the ecstatic music, the cry of trumpets and the shrilling of the flutes; but they were as insignificant street-noises to one who was falling asleep. He was within the veil of things now, beyond the barriers of sense and reflection, in that secret place to which he had learned the road by endless effort, in that strange region where realities are evident, where perceptions go to and fro with the swiftness of light, where the swaying will catches now this, now that act, moulds it and speeds it; where all things meet, where truth is known and handled and tasted, where God Immanent is one with God Transcendent, where the meaning of the external world is evident through its inner side, and the Church and its mysteries are seen from within a haze of glory.

So he lay a few moments, absorbing and resting.

Then he aroused himself to consciousness and began to speak.

He paused, poised in the act, till all of which he thought lay like a plain before a peak.
... "Myself, Lord -- there but for Thy grace should I be going, in darkness and misery. It is Thou Who dost preserve me. Maintain and finish Thy work within my soul. Let me not falter for one instant. If thou withdraw Thy hand I fall into utter nothingness."

So his soul stood a moment, with outstretched appealing hands, helpless and confident. Then the will flickered in self-consciousness, and he repeated acts of faith, hope and love to steady it. Then he drew another long breath, feeling the Presence tingle and shake about him, and began again.

"Lord; look on Thy people. Many are falling from Thee.  Ne in aeternumirascaris nobis. Ne in aeternum irascaris nobis .... I unite myself with all saints and angels and Mary Queen of Heaven; look on them and me, and hear us. Emitte lucem tuam et veritatem tuam. Thy light and Thy truth! Lay not on us heavier burdens than we can bear. Lord, why dost Thou not speak!"

He writhed himself forward in a passion of expectant desire, hearing his muscles crack in the effort. Once more he relaxed himself; and the swift play of wordless acts began which he knew to be the very heart of prayer. The eyes of his soul flew hither and thither, from Calvary to heaven and back again to the tossing troubled earth. He saw Christ dying of desolation while the earth rocked and groaned; Christ reigning as a priest upon His Throne in robes of light, Christ patient and inexorably silent within the Sacramental species; and to each in turn he directed the eyes of the Eternal Father....

Then he waited for communications, and they came, so soft and delicate, passing like shadows, that his will sweated blood and tears in the effort to catch and fix them and correspond....

He saw the Body Mystical in its agony, strained over the world as on a cross, silent with pain; he saw this and that nerve wrenched and twisted, till pain presented it to himself as under the guise of flashes of colour; he saw the life-blood drop by drop run down from His head and hands and feet. The world was gathered mocking and good-humoured beneath. "He saved others: Himself He cannot save.... Let Christ come down from the Cross and we will believe." Far away behind bushes and in holes of the ground the friends of Jesus peeped and sobbed; Mary herself was silent, pierced by seven swords; the disciple whom He loved had no words of comfort.

He saw, too, how no word would be spoken from heaven; the angels themselves were bidden to put sword into sheath, and wait on the eternal patience of God, for the agony was hardly yet begun; there were a thousand horrors yet before the end could come, that final sum of crucifixion.... He must wait and watch, content to stand there and do nothing; and the Resurrection must seem to him no more than a dreamed-of hope. There was the Sabbath yet to come, while the Body Mystical must lie in its sepulchre cut off from light, and even the dignity of the Cross must be withdrawn and the knowledge that Jesus lived. That inner world, to which by long effort he had learned the way, was all alight with agony; it was bitter as brine, it was of that pale luminosity that is the utmost product of pain, it hummed in his ears with a note that rose to a scream ... it pressed upon him, penetrated him, stretched him as on a rack.... And with that his will grew sick and nerveless.

In an instant he was back again, drawing long breaths of misery. He passed his tongue over his lips, and opened his eyes on the darkening apse before him. The organ was silent now, and the choir was gone, and the lights out. The sunset colour, too, had faded from the walls, and grim cold faces looked down on him from wall and vault. He was back again on the surface of life; the vision had melted; he scarcely knew what it was that he had seen.