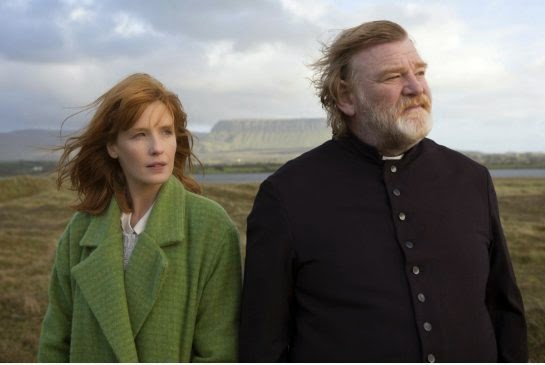 An anonymous man in the confessional tells Father James (Brendan Gleeson) that he was abused by a priest who's now dead, and so he's going to kill him in one week instead -- not because Fr. James is a bad priest, but because he's a good priest. Fr. James spends the next week reaching out to members of his small-town Irish parish, attempting to help them in their various scurrilous moral problems, and to comfort Fiona (Kelly Reilly), his fragile daughter. The days go by quickly, and he feels sinister and troubling forces closing in. He begins to wonder if he will have the strength to face his own personal Calvary at the week's end.

This film premiered at the Sundance Film Festival in 2014, and Brendan Gleeson won Best Actor at the British Independent Film awards that year. Calvary also took most of the major awards at the Irish Film and Television awards, and appeared at the Toronto International Film Festival.

Like its namesake mountain, Calvary is equal parts desolation and inspiration. The film manages to show both the horror of clerical abuse and what a priest ought to be like, and portrays the fall-out of the scandals which, along with post-modern indifferentism, have left Ireland a rather bleak spiritual landscape. It is not an easy film to watch, and will stick in your craw long after it's been seen. Why should anyone be interested in a movie like this?

Well we are undergoing a great Lent in the Church, a time for examination and repentance. Sometimes we can look at stories that depict the grimness of depravity to appreciate the hope of the redemption. At first glance there is little vindication in this film. But it has been justly celebrated for a reason: a redemptive threads run subtly throughout the whole sordid conflict. We need to practice seeing the lines of hope, and here the darkness serves to highlight the presence of light. Let’s consider a few of these threads.
First, Father James is a priest who, despite his personal flaws (he is no Bing Crosby padre), genuinely cares for his parish. He meets a cuckolded butcher who may have beaten his cheating wife, he confronts the same wife and her so-called boyfriend, he rows out to the island belonging to an American writer who needs company, and he puts up with the sneers and insults of the local bartender, a wisecracking male prostitute, an atheist doctor, and a pompous, degenerate rich man. This is a priest who, as Pope Francis has promoted, “has the smell of his sheep”, even if these sheep have an odor that is particularly ripe. If it’s not Christocentric love that drives Father James, there is nothing else that could motivate a man to minister to this motley group. He is the father of prodigals, even if the sons and daughters remain largely unrepentant.
The level of cynicism on the part of the townspeople is chilling. Although laced with occasional droplets of dark Irish humour, the parish is more like a collection of characters in Dante’s Inferno, figures better suited to a dark and tragic morality play. If Father James is supposed to represent Christ to them, then he is the Christ of Pilate’s praetorium or the via dolorosa, failed and stumbling amid the taunts and jeers of the crowd. Thus, the film is also a passion play, with the full mysterious power of the Paschal Mystery coursing like an electric current.

How is this story redemptive? “Suffering,” the French Jesuit theologian Jean Danielou once wrote, “is the only meeting point between good and evil, and the only chance for the evil ones to be saved by the innocent.” The crosses that Father James carries will bear fruit, and are even already bearing fruit, but this is hinted at obliquely, and will not be revealed to him directly. He must follow his Master all the way.
Yet Father James is not completely alone in his way of the cross. There are two women who stand out as lights: Fiona, who has not been emotionally well since the death of her mother several years before, has sought him out from London (Fr. James is a widower). Their conversations throughout the week reveal a growing level of healing between father and daughter, a reconciliation that will have an important effect at the film’s end. The other is a Frenchwoman named Teresa (played by Canadian actress Marie-Josée Croze), who has just lost her husband in a car accident and talks to Father James at the airport when he is tempted to flee his task. She gives one of the most poignant lines in the film, a key perhaps to interior freedom:

Father James: He was a good man, your husband?
Teresa: Yes. He was a good man. We had a very good life together. We loved each other very much. And now... he has gone. And that is not unfair. That is just what happened. But many people don't live good lives. They don't feel love. That is why it's unfair. I feel sorry for them.

Her attitude, at once grief and gratitude, allows her to see the world with eyes of compassion, so that her primary sorrow is for the plight of the loveless. In that moment, she unwittingly encourages him to stay the hard course of pastoral love.
Martyrdom is back in the news these days. After the execution of 21 Egyptian Christians by ISIS in Libya, a Coptic bishop told CNN that the only option for them was forgiveness. He said “We don't forgive the act because the act is heinous. But we do forgive the killers from the depths of our hearts. Otherwise, we would become consumed by anger and hatred. It becomes a spiral of violence that has no place in this world.”

But there is also a place for justice, both in the human realm, and certainly in the cosmic. "The arc of moral universe is long," said Martin Luther King, "but it bends toward justice." There can be no cheap grace.
Father James is an innocent victim, and his would-be killer, although wrong to take vengeance in this way, is the victim of an awful violation. The victim does not have to pay forward the violence; there are other paths to healing, so he is not absolved from what he is going to do. Yet this is how things will come to pass. Father James does not know if he will die on Sunday, and like Christ in Gethsemane, does not want this “martyrdom”. Sometimes the innocent must pay the blood-libel of the guilty.
The real word that Calvary gives us is that God does not hold back on pursuing lost souls to the darkest and bitterest end. Here, the only way for God to reach through the mad pain of violation by a shepherd, is for a shepherd to become a lamb of sacrifice. Thus Calvary rises within the larger horizon of resurrection, and becomes a living word of mercy.