While he was having a meal in the first class dining room he got chatting to a wealthy American couple. They liked Fr. Frank Browne, S.J. and asked him to stay on the Titanic with them until the boat reached New York. The American couple even offered to pay the rest of his fare to New York but Fr. Browne told them that his superior in Dublin would never allow it so he had to get off the ship when it stopped in Cobh.

The American man said to Fr. Browne, ‘come on down to the Marconi room and we’ll send him [the Jesuit superior] a Marconigram (a message sent via radio) and we’ll tell him that we’ll pay your way to New York’.

The telegram was sent by the wealthy Americans to the Irish superior of the Jesuits but after the Titanic stopped in Queenstown in Cobh, Fr. Browne was instructed to return to Dublin.

The water near Queenstown in Cobh wasn’t deep enough for the Titanic to dock so the only way it could be reached was by another boat called the Ireland. The Ireland set off towards the Titanic with bags of mail and the 123 Irish passengers who boarded the ship. Captain Tobin was in charge of the Ireland and he had a small envelope addressed to Fr. Browne. Inside was a note with five words on it - it read: ‘Get Off That Ship - Provincial’.

“Fr. Browne kept the note in his wallet for the rest of his life and said that it was the only time that holy obedience saved a man’s life,” he laughs. Link (here) to The Derry Journal 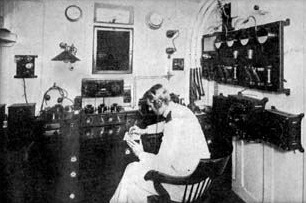