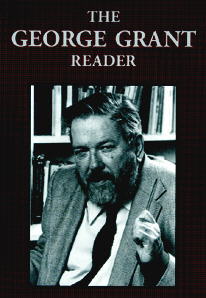 In the course of my research on the question of human relationship to emerging digital technologies and their environments, I've read from two books by the Canadian nationalist and philosopher George Grant. Grant was once a fixture on the Canadian intellectual landscape, roaming alongside other giants like Marshall McLuhan and Northrop Frye in the 1970s heyday that put the University of Toronto on the radar screen of the world. It was an era, it seems, that produced a set of remarkably penetrating and prophetic thinkers.

In his 1969 book Technology and Empire, Grant (incidentally, the uncle of erstwhile politician Michael Ignatieff), lamented that the idea of progress had lost its connection to moral development and had been co-opted into a utilitarian mastery of nature to satisfy human appetites. He was not blind to the multitude of benefits wrought by science and technology, and struggled to hold them in tension with his growing criticism of the emerging technologized man, but he did so confident that it was because we had internalized technology as a way of thinking, and could not step outside ourselves "to see the forest for the trees."
He wrote:


We can hold in our minds the enormous benefits of technological society, but we cannot so easily hold the ways it may have deprived us, because technique is ourselves. All descriptions or definitions of technique which place it outside ourselves hide it from us what it is...

Grant also realized that the post-modern rejection of any and all meta-narratives to describe the meaning of human existence -- the philosophical jettisoning of metaphysics -- and the consequent impossibility of holding any objective end or purpose of the human person, meant that there were no criteria to guide technological development other than a certain "inevitability". Certainly it seems today, with the rapid advancements in everything from biotechnology to smart phones, that we lack any ultimately stabilizing ethics because we lack teleology, a shared understanding of the "final ends" that give meaning to life. When it comes to technology, just because we can, so it seems we inevitably must.

Grant held that the freedom to advance scientifically was the only conceivable notion of freedom that our society would understand, because now knowledge and meaning could only be revealed through the scientific method:

Grant poses the question whether we might acknowledge the existence of "presence" as something that might limit (in a philosophical sense) or guide the creation of our artifices and devices. It is a notion that reminds me of Heidegger's notion of Being, a way of speaking about God in the world without involving the God of revelation:


Despite the noblest modern thought, which teaches always the exaltation of potentiality above all that is, has anyone been able to show us conclusively throughout a comprehensive account of both the human and non-human things, that we must discard the idea of a presence above which potentiality cannot be exalted? In such a situation of uncertainty, it would be lacking in courage to turn one's face to the wall, even if one can find no fulfillment in working for or celebrating the dynamo. Equally it would be immoderate and uncourageous and perhaps unwise to live in the midst of our present drive, merely working in it and celebrating it, and not also listening or watching or simply waiting for intimations of deprival which might lead us to see the beautiful as the image, in the world, of the good.

In the end, Grant is asking how we might also be observant to what we are losing in the midst of all our gains. His concern is for "the beautiful", which is an image of "the good", a sense that can only be cultivated by contemplation.

Nearly twenty years later, Grant would return to this theme with a book, Technology and Justice (1986), in which he essentially reprised the need for metaphysical principles to guide our technological development:


For those who affirm that the justice or injustice of some actions can be known in advance of the necessities of time and of the calculation of means, there is a pressing need to understand our technological destiny from principles more comprehensive than its own.... We are called to understand technological civilization just when its very realization has radically put in question the possibility that there could be any such understanding.

Grant's take on modernity was certainly critical, even pessimistic, but he viewed that as keeping with his role as a philosopher. Although he always seems to have remained uneasy about the direction the postmodern world -- and especially his beloved Canada -- was going, there was beneath it all, a sense of hope, and even, dare I say, of humour. I think both his concern and hope emerge at times this 1973 interview. For the section where he speaks about technology and society, scroll to 11:16:


Grant's cause is the restoration of our creaturely sense of wonder in life, recoverable when we realize again that "we are not alone". By this he means that we can recover our true selves only when we recover our true meaning in God. In The George Grant Reader (University of Toronto Press, 1998) he can be read saying:


It may perhaps be said negatively that what has been absent for us is the affirmation of a possible apprehension of the world beyond that as a field of objects considered as pragmata -- an apprehension present not only in its height as "theory" but as the undergirding of our loves and friendships, of our arts and reverences, and indeed as the setting for dealing with the objects of the human and the non-human world. Perhaps we are lacking the recognition that our response to the whole should not most deeply be that of doing, nor even that of terror and anguish, but that of wondering or marveling at what is, being amazed or astonished by it...; and that such a stance, as beyond all bargains and conveniences, is the only source from which purposes may be manifest to us for our necessary calculating.

In another brilliantly engaging book, Ordering Love: Liberal Societies and the Memory of God (2011), theologian and philosopher David L. Schindler takes a look at Grant, and to answer the charge of pessimism and utopianism, cites Sheila Grant, the late philosopher's widow, who shared a simple statement that her husband had repeated throughout his life: "It always matters what each of us does."

If one believes that the spiritual life is open to all, as Grant did, pessimism cannot be the final word. Schindler believes that Grant points us to what is ultimately the only credible response to charges that we are being unrealistic: the witness of "each one's entire way of life, as carried in the whole of one's countless concrete acts, thoughts and gestures." In other words, what the Second Vatican Council identifies as the universal vocation to holiness.