There's a rather unique opportunity this summer for young men who would like to discern more about the possibility of a vocation -- outside the programs of any particular group or order. It begins in Rome, followed by a study session on the island of Sardinia. A U.S. Jesuit, Fr. Anthony Wieck, will direct this course along with Fr. Jacques Servais, director of Rome's Casa Balthasar. Here's the details -- if anyone knows young men who might profit from this, spread the word. 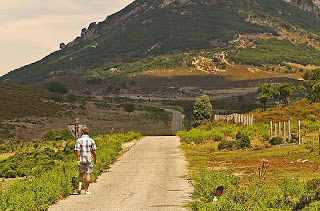 CASA BALTHASAR
Summer Session
DISCERNMENT WITH SHAKESPEARE AND H.U. VON BALTHASAR
Rome and Sardinia, Italy
July 16 - August 8, 2012
Come experience a most memorable 2 1/2 weeks of prayer, discernment, and academic and spiritual formation on the beautiful island of Sardinia near the Italian peninsula.
The Casa Balthasar, a house for many years under the direct patronage of then-Cardinal Ratzinger, offers this extraordinary session to young men who are interested in deepening their faith knowledge and cultural understanding.
From July 22 to August 8, 2012, the study session (in English) will focus on two classic works of Shakespeare and the spiritual treasures these works afford. We will especially dwell on the practical relevance of the theological topics broached in these plays for our day and age. We will use the insights of great writers recognized by the Church, particularly Hans Urs von Balthasar, to delve deeply into our topic.
Various communal prayer opportunities will be interspersed throughout our day, with daily Mass and other devotions offered. The session will take place in the country village of Gadoni: we will also provide the opportunity to explore the beauty of the surroundings and meet local residents.
Prior to the session, the Casa Balthasar will offer the opportunity of an optional time of religious and cultural visits in Rome, prayer and testimony, from July 16-20. On July 21, the group will leave for Sardinia.
Dates:
- Program in Rome (optional): July 16 to July 2, 2012.
- Study Session: July 22 to August 8, 2012.

Location:
The study session will take place in the village of Gadoni on the island of Sardinia, near Italy (arrange your flight to the city of Cagliari, in Sardinia).

Cost:
Each individual is to pay for all his travel costs. For the days in Rome prior to the session, one is to pay for his own accomodations; the Casa Balthasar will provide meals.

For the room and board of the study session in Sardinia there is no cost; but a good will offering of $200 US will be accepted if the applicant can afford it.
The Casa Balthasar operates on donations from benefactors.
There are no academic prerequisites for the summer seminars. They are held in various languages according to the participants.
Acceptance to the summer session is finalized upon approval of the director (after the application has been submitted) and after he has received one's travel itinerary.
For more information and registration, please contact Fr. Anthony Wieck, SJ, at awieck@jesuits.net, specifying if interested in the Rome pre-session program.

"The theater has the power to place man in acute, inescapable situations that strip him naked and confront him with the unavoidable question: what is man really, this being that exists in a terrible finitude? His situation in the world is dramatic; try as he might to hide it from himself, the theater reveals it".
- Hans Urs von Balthasar