Spiritual but not Religious

April 01, 2012
Nowadays you often hear people say that they are “spiritual but not religious”. How might we respond to this? 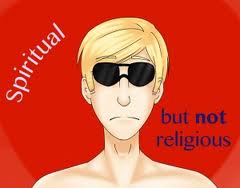 There are many good and morally upright people who do not practice religion. Some have been disillusioned by the human failures of the Church’s members. Others have simply never been presented with the good news of the Church in its fullness. Yet we believe, according to the Catechism, that “those…who nevertheless seek God with a sincere heart, and, moved by grace, try in their actions to do his will as they know it through the dictates of their conscience – those too may achieve eternal salvation.” Often they show us many things about God by their own natural virtue.


The recent but growing phenomenon of SBNR has come about by (and is most pronounced) among the baby boomers and their offspring. The boomers widely withdrew from religion, emphasizing the need for personal choice over cultural inheritance, and largely left their children to find their own way in matters of ultimate meaning. It's no surprise, then, that many describe themselves this way today. There's also unfortunately a subtle implication – often held expressly – that being spiritual and religious are mutually exclusive, with the latter associated with rules, restrictions, and narrow-mindedness. If you are SBNR, does that make me RBNS?


But this aside, how might we respond to people who say they have no time for religion? Like all our encounters with others, we must treat every conversation, and every person, with careful discernment born from respect. Our responses depend greatly on specifics of the persons we are talking to. Where are they coming from? Did they at one time truly know Christ in his Church and then reject Him – a more delicate and serious spiritual situation? Or were they part of the great mass of un- or poorly catechized Catholics who simply drifted away? Let us assume, as is increasingly common , that we are talking about the latter, people who were never really practicing believers, who may have gone to church as children and received a sort of ersatz-spirituality, but left as young adults. Perhaps they recall feeling bored in church, now spiced with the anti-Christianity polemic they picked up at university. How does one explain to persons like this the importance and value of religion?

“The Christian ideal has not been tried and found wanting; it has been found difficult and left untried.” – G.K. Chesterton, What’s Wrong With The World

The first thing to distinguish with this question is the difference between "spiritual" and "religious". Being "spiritual" does not make someone unique, since every human being is “spiritual”. Objectively, it refers to the human dimension that encompasses thoughts, feelings and intuitions, and where one relates to the divine. But what “being spiritual” means in common parlance almost always varies from person to person. Today it generally means that I experience some kind of interior motions and occasionally have philosophical thoughts, usually of a syncretistic nature. In the absence of a religious tradition in my life, however, spirituality risks becoming merely what-feels-good. It almost always tries to fit God into a scheme of my own choosing, and in a framework of a closed-in subjectivity. Religion asks for more and gives more: it can set me free.

The etymological roots of the word religion are obscure. It certainly comes from the Latin word religio, religionem, which the philologist Max Muller said would have meant "reverence for God or the gods, careful pondering of divine things, piety", noting that for many ancient cultures their religion and their law would have been of identical structure. One theory holds that religio comes from re-legare – literally, "to read again", in the sense of "go over again" and "consider carefully". Another theory holds that it comes from re-ligare, meaning "to reconnect", the meaning favoured by St. Augustine.

All these roots, however, convey the idea that religion is something more than just "what I feel", but involve the reading or connecting to an objective spiritual reality (which, of course, I may also feel). But, above all, religion is simply the virtue of giving God in justice the worship that is due to him. If God is real or even just "possible", it matters that we seek him out. If religion is the pondered and formalized expression of the human experience of God over a long period of time, then it's worth exploring religion. A Creator God deserves the friendship and gratitude of his creatures.

For those who acknowledge God's existence, it's helpful to lead them to acknowledge that God is also personal. This is important, because the tendency today is to reduce God to a mindless cosmic force (think Star Wars or Spinoza), or an intellectualized first cause or prime mover (who can be safely kept in my cerebrum). God is not, as C.S. Lewis reminded his readers, a divine clockmaker who watches bemusedly from without as we complicate and generally damage ourselves. He is not the cosmic vivisectionist. He is actually something more like Aslan; better yet, he is someone who revealed himself in the person of Christ. This was not the action of an absentee landlord, but a God who wanted us to know him. If what a personal God desires is relationship, then we are made to know, love, serve and reverence him. This we do best by drawing from the collective experience of a faith tradition. While there is a personal dimension to each person's faith journey, religion is there as a gift from a God who revealed himself first, and is curated by his ministers and supported by a community of believers. We are not alone in the search for meaning, and do not have to reinvent everything as spiritual lone rangers. In this way, religion is the balance of the objective and subjective dimensions of divine truth in human life.

Entering into a relationship with the Creator is personal but also works best as a body, both at the local level and universally ("katholikos"), for God wanted his people to live in unity. Jesus prayed to the Father "that they may be one" (let's note in passing the relational composition of the Trinity), and left the seeds of a nascent Church community. Religion is the place where one comes to experience communio, or oneness of heart and mind. The Church, with all its saints and sinners, with all its glories and failures throughout history, is the home where God's people love and serve God and each other, journeying in time towards the "ultimate union" that is promised, as well as written into our DNA.

There are, of course, a great many benefits to religion, the great spiritual fruits and resources of the Church: the sacraments above all, but also the prayer traditions, practical wisdom, and the moral direction provided for life in today’s world. We should always remain ready to invite SBNR people to explore the riches of religion, helping them see that after 2000 years, there is something there that will answer their deepest needs and questions, even if it may require calling them out of their own fixed systems of thought.

And if people think that religion itself is too much of a fixed system, it's worth recalling Chesterton's observation about "orthodoxy" (from his book by the same title), which is synonymous here with the Catholic religion as religion. It's worth quoting in full:

This is the thrilling romance of Orthodoxy. People have fallen into a foolish habit of speaking of orthodoxy as something heavy, humdrum, and safe. There never was anything so perilous or so exciting as orthodoxy. It was sanity: and to be sane is more dramatic than to be mad. It was the equilibrium of a man behind madly rushing horses, seeming to stoop this way and to sway that, yet in every attitude having the grace of statuary and the accuracy of arithmetic.

The Church in its early days went fierce and fast with any warhorse; yet it is utterly unhistoric to say that she merely went mad along one idea, like a vulgar fanaticism. She swerved to left and right, so exactly as to avoid enormous obstacles. She left on one hand the huge bulk of Arianism, buttressed by all the worldly powers to make Christianity too worldly. The next instant she was swerving to avoid an orientalism, which would have made it too unworldly. The orthodox Church never took the tame course or accepted the conventions; the orthodox Church was never respectable. It would have been easier to have accepted the earthly power of the Arians. It would have been easy, in the Calvinistic seventeenth century, to fall into the bottomless pit of predestination.

It is easy to be a madman: it is easy to be a heretic. It is always easy to let the age have its head; the difficult thing is to keep one's own. It is always easy to be a modernist; as it is easy to be a snob. To have fallen into any of those open traps of error and exaggeration which fashion after fashion and sect after sect set along the historic path of Christendom – that would indeed have been simple. It is always simple to fall; there are an infinity of angles at which one falls, only one at which one stands. To have fallen into any one of the fads from Gnosticism to Christian Science would indeed have been obvious and tame. But to have avoided them all has been one whirling adventure; and in my vision the heavenly chariot flies thundering through the ages, the dull heresies sprawling and prostrate, the wild truth reeling but erect.

May we, too, see our religion as less of a theory and more of an adventure and a love affair.

This is not a comprehensive treatment of the question of spiritual vs. religious, but hopefully it might help shed some light on the issue. Adapted from a column I wrote in the Messenger of the Sacred Heart.