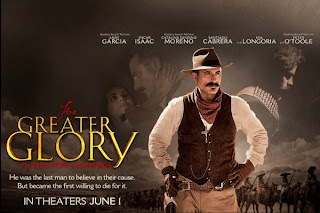 Taking advantage of my American sojourn, I went see the film For Greater Glory in the cinema, as it looks like it will not be playing in Canada, and its U.S. run is winding up. I'm glad I did. The film is emotionally moving and engaging notwithstanding its 2.5 hour length. It chronicles the Cristero War in Mexico (1926-29), which took place when the government of Plutarco Calles began enforcing the anticlerical laws of Mexico's 1917 constitution. Religious observance was essentially outlawed, foreign priests were expelled and many clergy murdered and altars smashed. Eventually, the people organized themselves into an armed resistance.


Here were the highlights for this reviewer:
There are several knit-picky critiques one could make of the film, and most secular reviewers have done so -- usually with historically flimsy and sloppy reasoning -- but for my part, I would only point out a few discordant notes, such as descent into melodrama ("I have never had a son, but if I did, I would want him to be just like you") and cliche ("stand up for what you believe!"). It also seems the film sprints from climactic scene to climactic scene, with unrelenting dramatic (and musical) adrenaline -- it would have been better to breathe a little. But this and the occasional preachiness somehow doesn't kill the movie's power.

In the theatre in Dallas where I watched it, the audience was largely Hispanic, plus our group of three Jesuits and a married couple. The crowd sat still as all the credits rolled and included footage of the firing squad execution of St. Miguel Pro, S.J. and mentions of the canonizations of the 1990s and 2000s. When they finally ended, the audience broke into spontaneous applause, and tear-stained faces were visible as we exited the cinema. People were crying "Viva Cristo Rey!" in the bathrooms and outside the mall as we headed for our car.

The Cristero rebellion ended when the U.S. Ambassador Dwight Whiteny Morrow brokered a deal between Mexico and Rome, which had been decrying the persecution. It lifted the more flagrant laws, although in 1940 the Church still had no legal rights (clergy could not even vote and were forbidden to wear clerical garb in public). Many of these restrictions went unenforced in the decades that followed, but they were not removed from the constitution until 1992. I remember the Mexican priests who were my high school teachers acknowledging this milestone at the time with great joy. Who would have thought that most Catholic of nations did not allow religious instruction and crucifixes on walls until near the end of that most bloody of centuries?

Rated R for violence (there's a very high body count). Not for the weak of heart, but generally recommended when it finally comes out on DVD.