Hearts on Fire in Dallas

The first Hearts on Fire retreat was last weekend. It's taken me this long to blog about it, since we needed some time to rest and get photos back, and basically let the experience settle in. Dallas has proved to be a hospitable first stop, from the Jesuit communities at Jesuit Prep High School and Montserrat Retreat Centre at Lake Dallas where we stayed, various families, and the parishioners at St. Ann's Parish which hosted our retreat.

St. Ann's is the fifth largest parish in the United States, with 30,000 members. It is a campus. The parish complex literally includes a former strip mall with clock-tower and parking lot, a massive gold-domed church, a plaza with fountain, and halls and auditoria galore. The church employs four full-time youth ministers. I had never seen a Catholic mega-church before, but this was it! 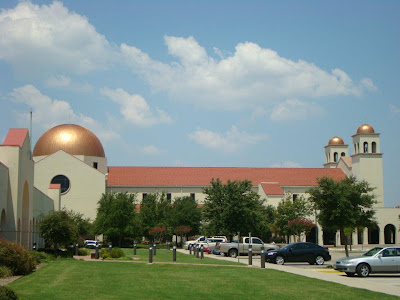 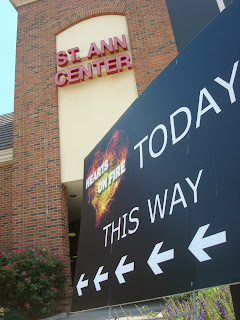 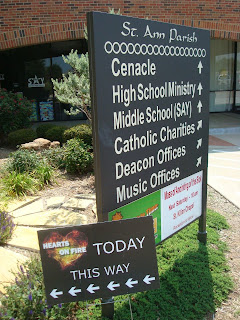 There was a fairly large group of young adult retreatants, about 130 souls, on the retreat which began Friday evening and ended with the Saturday night vigil Mass. My duties lie primarily in leading music and giving a talk on Discernment of Spirits, desolation and consolation according to St. Ignatius. 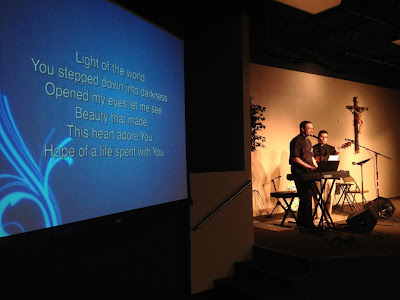 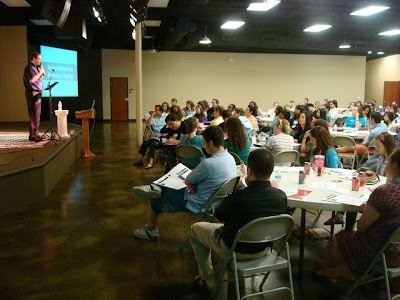 Highlights for the retreatants included the adoration holy hour, presided over by Fr. Anthony Wieck, S.J. in the main body of the church... 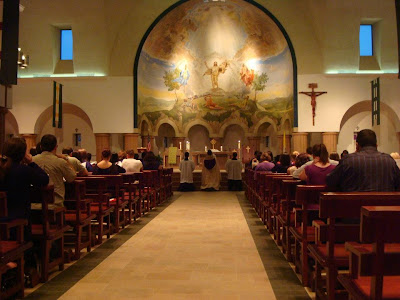 ... and an experience of personal prayer, after some instruction, along the lines of Ignatian meditation for an hour the next day, in various quiet places in the church complex: 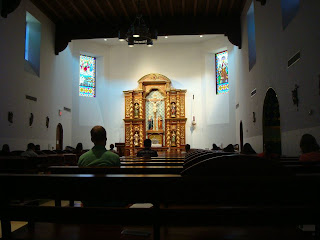 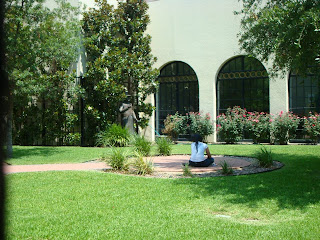 The retreat attempts to introduce young people to spiritual practices that they can take with them into their lives beyond the retreat: the morning offering, living "eucharistically" during the day, and ending with the evening review or examen. A steady emphasis on the Sacred Heart runs throughout, since before one can really love God, one needs to know how much God loves you.

When the retreat was over Saturday evening, I drove to another church to do sound checks for our evening gig at the The Shepherd's Cafe.

This is an outstanding young adult ministry, worthy of imitation if any zealous folks can get inspiration and can muster nerve. Much like Catholic Underground in New York City, Shepherd's Cafe is a monthly gathering of young adults to drink coffee and listen to Catholic artists play music. There are usually hundreds who come out. 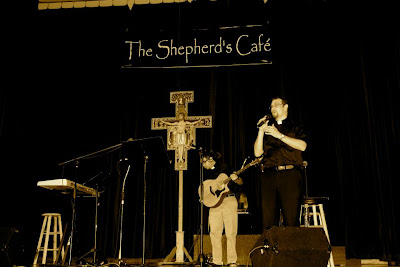 They kept saying that this was the first time any Jesuits had come and done music, although our friends the Conventual Friars of the Renewal (CFRs) are involved. I thought of how St. Ignatius was so inspired by St. Francis and other great saints before he became one himself. Similarly, we follow in the footsteps of our fellow religious...

Five Jesuits leading the Salve Regina under the gaze of the cross of San Damiano: 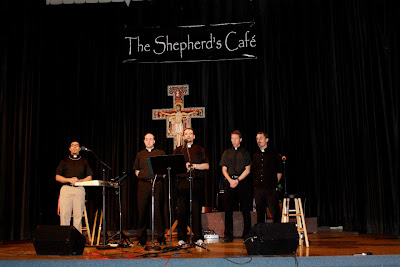 Fr. Phil, our team leader with Yong Oh, founder of Shepherd's Cafe, which celebrates its fifth anniversary this year: 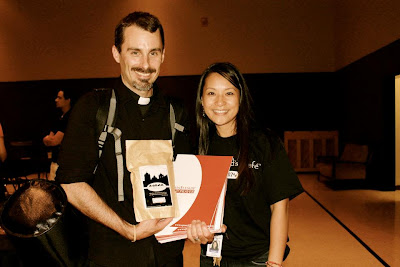 In addition to our music, Santiago and I experimented with a dramatic rendition of selections from "The Hound of Heaven", while he played the jembe. I know it looks like I be preachin' the word, but I suppose, in a sense, I am ... 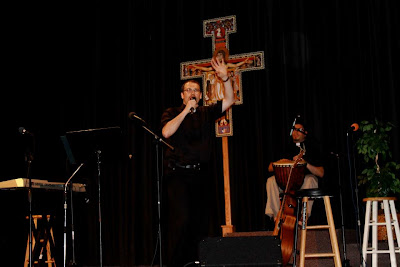 Both St. Ann's Parish and Shepherd's Cafe were inspirational places, and it was a privilege to have shared song and word with the people there. Next stop: San Antonio.