June 16, 2012
Happy Feast of the Sacred Heart, live from "the Sacred Heart convention" -- that is, the national gathering of the Apostleship of Prayer in St. Louis, Missouri. The AoP is not a movement in itself, but considers its mission as inspiring other groups, to animate and act as leaven by assisting people in their spiritual lives. Here, over the past week, I have met many inspiring Jesuits from all walks of life.

Excellent talks were given by national director Fr. James Kubicki, S.J., my team leader and director the youth and young adult wing, Fr. Phil Hurley, as well as Fr. Claudio Barriga, the Director General Delegate of the AoP in Rome.


Fr. Kubicki gave an inspiring address on the how the Sacred Heart is present in each "week" of the Spiritual Exercises of St. Ignatius.

Fr. Barriga gave an overview of the Eucharistic Youth Movement (EYM), which is linked to the AoP. Although not well-known in North America, the EYM is huge -- in fifty countries on all five continents, with millions of members. Like boy scouts and girl guides, they may sport uniforms according to age levels, and make serious commitments to prayer. 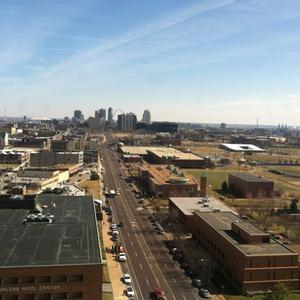 I didn't make it down to the famed arch downtown, but I could see it from my window, on the eleventh floor of "Jesuit Hall." 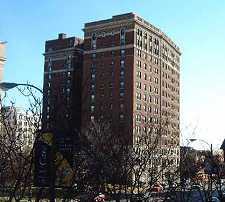 Jesuit Hall is a former hotel, and one of the largest S.J. communities in America, largely serving St. Louis University and as the residence of retired priests.

It has fifteen floors in total, and stands beside the beautiful Church of St. Francis Xavier... 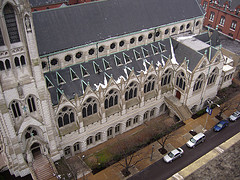 ...which one can look down on from the roof of Jesuit Hall. 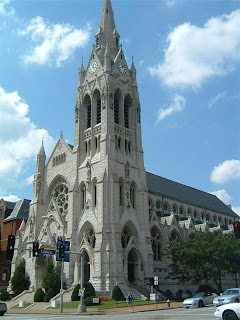 Finding it unlocked this morning I went into it and found it deserted so I had some quiet time. 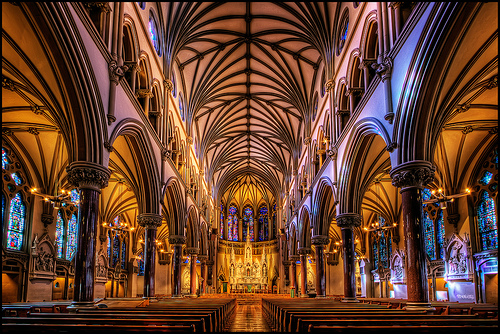 The interior, neo-Gothic, was stunningly beautiful. 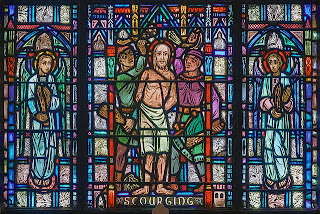 A detail of the stained glass.

I also had a wonderful visit with my uncle and aunt who live near St. Louis on a small lake -- the perfect refreshment from a week of travels and conferences. When driving me back this morning, we passed the Cathedral Basilica of St. Louis, which I didn't enter, but which is famous for its mosaics. St. Louis was once called "the Rome of the West" because of the vitality of its Catholicism and its many churches.


*  *  *
It would be indiscreet to cite by name the many inspiring Jesuits I've met here in St. Louis, but I'll make an exception, given his "venerability", for Fr. James Swetnam, S.J. We met in Rome five years ago, and he has since retired to his home province. Fr. Swetnam is something of a legend. After his ordination he studied and then taught at the Pontifical Biblical Institute in Rome for half a century. A specialist on the Book of Hebrews, as his website gives witness, Fr. Swetnam educated innumerable priests, and counts many archbishops and cardinals as former students. He now gives retreats and spiritual direction.


As we ate lunch in the cafeteria at Jesuit Hall he asked me if I knew Ottawa Citizen columnist David Warren, whom he follows from St. Louis, and of whom I acknowledged a familiarity. He then asked if I knew of Roger Scruton, whose work on beauty I was familiar. Finally he asked if I liked Chesterton, to which I responded in the affirmative. At this, Swetnam broke out into a great smile and said: "Son, you have made my day. You are in danger of becoming an educated man!"

I've learned many things about it this past week, and here are a few minor points:

The Sacred Heart of Jesus is not one devotion among many, but kind of a "meta-devotion", which animates our lives as believers, as it shows us the depths of God's love for his creatures (John 3:16). The Word became flesh and took on a human heart, and it continues to be this heart that desires to give (agape) and which desires to have our love in return (eros). As Benedict XVI has said, the basis of the Sacred Heart is as old as Christianity itself.

The heart, of course, is a symbol of the centre of each person, and the entirety of a person. We notice this sense when we say of someone "she has a good heart" -- we really mean she is a good person in a very basic way. For the Jews, the heart was the seat of wisdom in a soul, the place of the will or choice. "Heart" appears in Proverbs ninety-nine times, for instance.

When we peel back the layers of sentimental spirituality, one glimpses the overwhelming power of this core of the person of Christ. My colleague Santiago wrote a good reflection on it today, over at our group blog.

I have come to appreciate this icon by my father, which to me has none of the saccharine, but rather conveys both an intensity and gentle invitation. It's a large file. Right-click and save if you wish.


A few meditation points about the image of the heart itself:

The heart is visible. Jesus does not hide his love, but makes it readily available to all. He is vulnerable in that respect. It calls us to let down our barriers.

There are thorns that encircle it. This is not a valentine, but a passion that has and will suffer for the beloved. Just as our own vulnerable love can suffer, so did Christ’s for us.

There’s a cross on top of the heart. John and Mary stood at the foot of the cross when others had run away. This is an invitation to stand with them for Jesus. This is love in action.

The wound. It reminds us of the blood and water that flowed when the heart was pierced by the soldier’s lance. They both signify life (eucharist and baptism) that result from the sacrifice. It is also the birth of the Church. Much to ponder here.

The fire blazing. The most dramatic element, it tells us about the fierce love that God has for his people. It offers light and warmth to all who approach, and its blaze melts the hardened parts of our hearts. It is also contagious, and will inflame us in going out to set the world on fire.