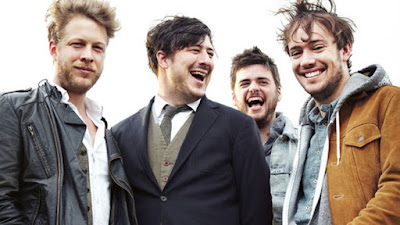 While preparing songs for our retreats and coffee house ministries this summer, I have come across many by secular artists -- that is, musicians who don't self-categorize as belonging to genres of religious music -- which were nonetheless powerfully spiritual. This is my top ten list from past and present.


1. Along with "Broken Wings", Mr. Mister's song "Kyrie" was the best from their 1985 album Welcome to the Real World. This band disappeared too soon after a string of hits. Their lead singer, Richard Page, was a powerful singer as "Kyrie" demonstrates effectively:

3. Oasis "Wonderwall" from 1995 may be about God or a person that will be instrumental in the singer's salvation; in any case, it's a plaintive cry, as eloquent as any psalm. If a prayer, then many lines take on particular poignancy, and the song ends with a hope for being saved. A question: what's a wonderwall?

There is also a very good acoustic cover of "Wonderwall" by Ryan Adams, which was once nominated for a Grammy award.

4. Dave Matthews Band "Where are You Going?" from 2002 has always evoked for me the Gospel scene of the two disciples running after Jesus. It could very well be a song about discipleship, then, the desire to be with the Master:

See also Dave Matthew's "The Christmas Song", for a most unusual but, in my opinion, soulful throwback to the story of Christ's birth.

5. U2 usually ends its concerts with the song "40", a song derived from Psalm 40. In the following video, they finish a concert from their 2005 tour with two of their religious-themed songs, "Yahweh" and "40" -- my favourite being "Yahweh".

The Irish rockers are an established super-band, evidenced by the adulation of the stadium crowd, but they have always given the last word to God the Father. Note Bono hanging his rosary on the mic stand at 8:55 and dedicating it to "Fr. Tim Scully of Notre Dame University":

6. The imagery in Coldplay's anthem "Viva la Vida" is eclectic, but what is clear is that the protagonist recalls his former life in which he was domineering, powerful, reckless and feared, and then, by way of dispossession and poverty, found spiritual redemption. Now he has visions of glory and the hope of eternal life, which he celebrates with great jubilation:

Coldplay's songs "Fix You" and "God Put a Smile Upon Your Face" also strike me as having religious overtones.

7. Leonard Cohen's "If It Be Your Will", is here sung live in London in 2009. The Montreal poet-singer digs deep into his heart and sings his availability to the Lord:

8. The British folk-rock band Mumford & Sons extraordinary "Awake My Soul" from their 2010 album Sigh No More:


9. Paul Simon's "Love is Eternal Sacred Light" from his marvellous 2011 album So Beautiful or So What. A tribute to the eternal origins of love, contrasted with the demonic evil of darkness. The whole album is excellent, his best work since Graceland.


10. Then there's Bob Dylan's "You Gotta Serve Somebody", the opening track from his 1979 album "Slow Train Coming." (check out Etta James's funked-up version, too). Here's a live version, sung at the 1980 Grammy's, believe it or not!


A list like this can only be subjective, of course, but I've seen depth in all of these songs. I may have missed some gems, but these ones stick out.